More troops sent to flush out Abu Sayyaf in Bohol 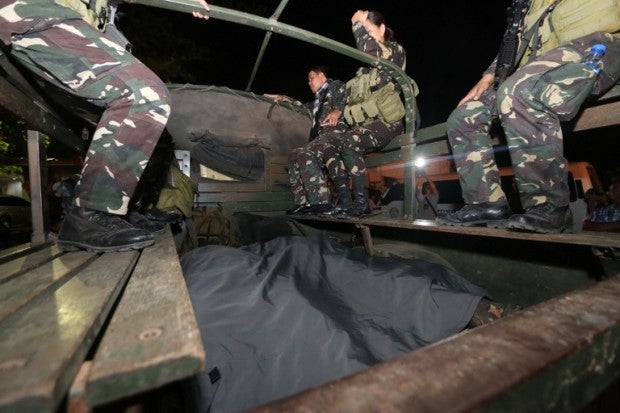 Soldiers watch over the bodies of colleagues killed in clashes in the village of Napo, Inabanga town in Bohol on April 11, 2017. Ten people including four Philippine security officials were killed during clashes with suspected Abu Sayyaf terrorists on the popular resort island as millions prepare to travel for the Easter holiday. AFP

The Armed Forces is pouring more soldiers into Bohol to flush out the remnants of a suspected Abu Sayyaf band that managed to slip onto one of the country’s famous tourist islands.

The army said the death toll rose to 10 before dawn as government forces killed a sixth gunman from the Abu Sayyaf, a notorious southern Philippines-based group which has pledged allegiance to Islamic State.

Local officials said at least 10 armed men sailed upriver Monday to a rural area of Bohol, raising fears they were there to kidnap foreign visitors traveling for the Easter holidays.

“We continue to bring in fresh troops to be able to assist those that are in the area, replace them if necessary, to allow for a more intensified clearing operation,” military spokesman Brigadier-General Restituto Padilla said on CNN.

He did not specify how many security forces had been drafted in but said that they were from the army, navy and air force.

Three soldiers and a policeman have died since the operation began early Tuesday.

Padilla and other police and military officials have said they believe that Abu Sayyaf is responsible for the incursion.

The military spokesman said the goal was to kill or capture by Wednesday the remaining infiltrators and contain the fighting outside the town of Inabanga, about 80 kilometers from the tourist section of Bohol.

At least 100 residents have fled the area, he added.

Hoteliers and visitors told AFP the fighting has not affected tourist traffic on the island, though there was increased police security.

Bohol, about 600 kilometers south of Manila, is a mere 30 minutes’ boat ride away from the major port of Cebu on Cebu island, which is also among the country’s leading tourist destinations.

Bohol is sought after by foreign tourists who go there to swim with docile whale sharks, travel its rivers on boat cruises, and lounge on unspoiled beaches.

The Abu Sayyaf, a kidnap-for-ransom group also blamed for the nation’s worst terror attacks, has pledged allegiance to the Islamic State movement that holds large swathes of Iraq and Syria.

Over the past year the Abu Sayyaf has been expanding its activities from its main base on the remote southern island of Jolo, about 500 kilometers southwest of Bohol.

Its boat-riding gunmen have been boarding commercial and fishing vessels off Jolo, near Malaysia, and abducting dozens of foreign crew members.

The group has beheaded two Canadian tourists and a German yachtman since last year, and ransomed off sailors reportedly for large sums of money.

The United States and Australia recently warned their citizens about possible “terrorist” kidnappings in Bohol or nearby Cebu island. Britain on Tuesday issued a similar travel advisory. CBB