‘Killer congs’ challenged to show themselves up | Inquirer News

‘Killer congs’ challenged to show themselves up 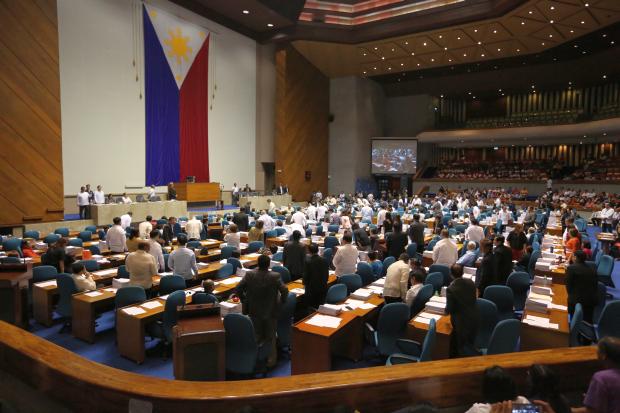 Lawmakers in the House of Representatives who hid behind voice voting in favor the death penalty bill were dared to come out of the shadows.

This developed after the House approved on second reading House Bill 4727, which seeks to reimpose the death penalty on drug-related offenses,

The voting took place with nuns and members of religious groups watching from the gallery.

Ironically, the House approved the bill for second reading on Ash Wednesday, which signaled the start of Lent.

In an interview with reporters after Wednesday’s session, Albay Rep. Edcel Lagman, who led the opposition to the bill, lamented the lack of transparency in the absence of nominal voting, which would have enabled lawmakers to explain their votes.

By resorting to viva voce, lawmakers hid behind the chorus of voice voting for the bill, without explaining their vote, Lagman said.

“In the history of Congress – I’ve been here since 1987 – I have not experienced this inordinate muzzling of members of the House,” he said.

“This is a chamber of puppets and bullies!” he added.

Ifugao Rep. Teodoro Baguilat Jr. said the third reading approval of the bill would allow nominal voting. Only then would the public find out the identities of the pro-death penalty lawmakers, he said.

“We are in the House of Horrors,” he said. “We are treated like puppets. Whatever the majority or the Speaker wants, with the power of the gavel, that’s what’s going to happen.”

Lagman said his proposals, which were shot down, sought to delete penalties of death in the bill. They were legitimate amendments and should not have been rejected in an omnibus motion.

Oriental Mindoro Rep. Reynaldo Umali, the bill’s sponsor, moved for an omnibus rejection of Lagman’s amendment, which would defeat the purpose of the bill.

“These are all legitimate amendments. They should be taken individually. There can be no omnibus rejection,” Lagman said.

For his part, Ellecer Carlos , spokesperson of the In Defense of Human Rights and Dignity Movement (iDefend), dared the lawmakers who hid behind their voice votes to come out and expressly declare their votes for the death penalty.

“IDefend will expose the ‘killer congs,’ the killer congress persons who do not have a conscience in spite of the presence of religious sectors watching them,” Carlos told reporters.

He said lawmakers just kept on repeating the same individual amendments, which would unduly delay the prompt approval of the bill.

“We will not accept it (the amendments) anyway… This is a penal law. It will water down the compelling reason why we need to reimpose this,” Umali said.

It was Majority Leader Rodolfo Fariñas who moved to end the period of amendments, noting that lawmakers were no longer proposing “honest to goodness” amendments to the bill.

“Since this is very apparent what they’re doing is not to introduce honest-to-goodness amendments,I move to terminate the period of amendment,” Fariñas said, to the opposition of anti-death penalty lawmakers.

In the end, it became a numbers game – and the House plenary approved the motion to terminate the amendments.

Turning a deaf ear on the opposition, the plenary later approved the bill on second reading before adjourning.

“The ayes have it. House Bill 4727 is approved on second reading!” Batangas Rep. Raneo Abu, the presiding speaker, said, banging the gavel and adjourning the session.

The death penalty bill has been amended to limit it to drug-related offenses, in a bid to support the administration’s bloody narcotics crackdown that has claimed over 7,000 lives.

The bill as stands has been amended to remove plunder, rape and treason from being covered by the death sentence.

The bill will not impose a mandatory death sentence, giving the judge the leeway whether to impose life sentence or the maximum penalty of death.

The penalty will be carried out by hanging, firing squad, or lethal injection. /atm