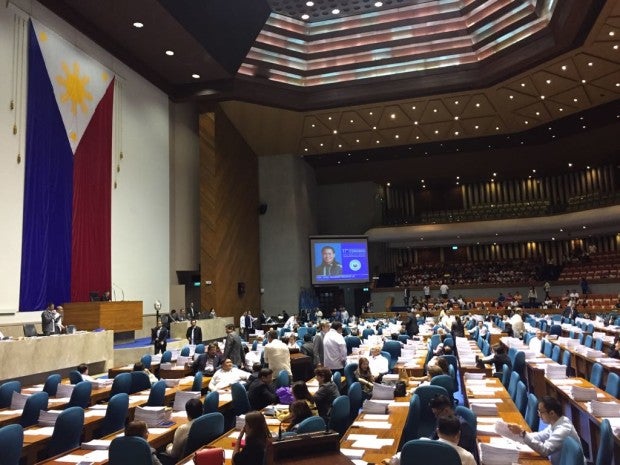 On Ash Wednesday, which marked the start of Lent, the House of Representatives approved on second reading the bill seeking to restore the death penalty.

With nuns and members of religious groups watching from the gallery, the House majority approved by voice voting House Bill 4727, which seeks to impose the capital punishment on drug-related offenses.

The ayes won over the nays, with the latter led by anti-death penalty lawmakers Albay Rep. Edcel Lagman and Buhay Rep. Lito Atienza.

The second reading approval of the bill puts the restoration of the death penalty closer to its third and final reading, when the bill would just be voted on by lawmakers without the need of amendments.

During its plenary session, the House voted to approve the bill after it closed the period of amendments, turning a deaf ear to pleas by the opposition to reopen the amendments on the bill.

Akbayan Rep. Tom Villarin asked the body to remand the bill to the dangerous drugs committee which should have jurisdiction over the bill. The justice committee deliberated on the bill.

Lagman proposed deleting the penalty of death in the bill altogether.

“The principal reason why I am proposing this amendment is that the death penalty is abhorrent, which should not find any justification in our penal system,” he said.

In the end, it turned into numbers game – and the House plenary by viva voce shot down all the proposed individual amendments.

Umali later on asked for an omnibus rejection of all the similar amendments pitched by Lagman, who proposed to delete the word “death” from the bill and impose the maximum penalty of reclusion temporal to reclusion perpetua instead.

“Any proposition to amend by way of deletion the word death penalty is inconsistent with the clear intent and purpose of the law,” Umali said.

Atienza said an omnibus rejection is a “bad precedent” in the House of Representatives.

“Let them be rejected or sponsored in manner provided for by the rules. An omnibus rejection is an anathema,” Atienza said.

When Lagman asked the body to vote on his motion by nominal voting, the presiding speaker called for the body to stand up if they would support Lagman’s motion.

Only 28 lawmakers stood up, and Lagman’s motion was lost, because it needed one-fifth of the body for any motion for nominal voting to be approved.

When Lagman proposed a second roll call to determine if the one-fifth vote was met, Majority Leader Rodolfo Fariñas of Ilocos Norte seconded Lagman’s motion on the condition that he would move to terminate the period of amendments afterwards.

The second roll call showed that 227 members responded to the call. With 46 of 227 or one-fifth needed for nominal voting, Lagman’s motion was lost.

Fariñas finally moved to end the period of amendments, noting that lawmakers were no longer proposing “honest-to-goodness” amendments to the bill.

“Since this is very apparent what they’re doing is not to introduce honest to goodness amendments… I move to terminate the period of amendment,” Fariñas said, to the opposition of anti-death penalty lawmakers.

Turning a deaf ear to the opposition, the House plenary approved to terminate the period of amendments, and finally, approved the bill on second reading before adjourning the session.

“The ayes have it. House Bill 4727 is approved on second reading!” Abu said, banging the gavel.

The bill as it has been amended exclused plunder, rape, and treason from the death sentence.

The penalty will be carried out by hanging, firing squad, or lethal injection. / JE/ATM