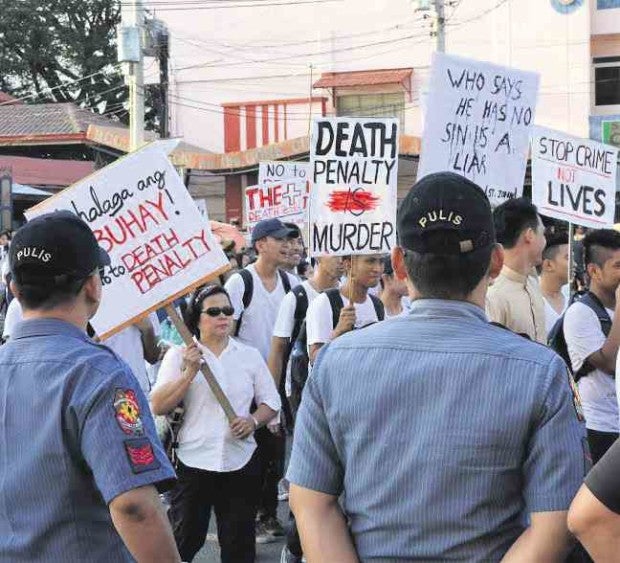 Parishioners in San Carlos City in Pangasinan province add their collective voice to calls against the reimposition of death penalty. —RAY ZAMBRANO

It’s final – plunder, rape and treason had been removed from the death penalty bill, which is expected to be passed on second reading tomorrow, Ash Wednesday, in the House of Representatives.

This after the majority bloc in the House on Tuesday’s session railroaded the approval of the individual amendments on the death penalty bill.

Acting Majority Floor Leader Pampanga Rep. Juan Pablo Bondoc introduced the proposed amendments to the bill, which was to remove all references to plunder, treason and rape.

He also moved to amend the title of the bill limiting it to drug-related offenses under the Comprehensive Dangerous Drugs Act.

The presiding Deputy Speaker Batangas Rep. Raneo Abu put the amendments into voice voting, to which the ayes won over the nayes.

Buhay Rep. Lito Atienza and Albay Rep. Edcel Lagman opposed the moves of the majority to introduce amendments without opening it to nominal voting on the floor.

Atienza particularly took note of the removal of plunder, which he described as “one of the biggest crimes committed in our nation.”

Lagman opposed the move of Bondoc to collate all the amendments and subject these to a one time approval without listening to the appeals of the other lawmakers.

In the end, their pleas fell on deaf ears.

Abu put the amendments to a vote, and the ayes have it, before Bondoc moved for a brief suspension of session.

When session resumed, Bondoc already asked the Secretary General to print copies of the amended copies of the death penalty bill for Wednesday’s session, and the session tackled other matters.

The House adjourned with Lagman’s appeal to open the period of amendments left hanging anew.

In an interview after the session, death penalty author Deputy Speaker Fred Castro said the House majority is set to put the death penalty bill to a vote for second reading on Wednesday, even though the predominantly Catholic nation will be celebrating Ash Wednesday.

“If it’s Ash Wednesday tomorrow, it will be a reminder to us that we all come from the dust,” Capiz Rep. Castro said.

He said tomorrow’s approval of the bill on second reading will push through regardless of the Ash Wednesday commemoration.

“It’s only related to our Christian faith. Passing the death penalty is an act of man, not an act of God,” Castro said.

Castro said the House plenary would put to a vote a motion whether or not to close the period of amendments, and thereafter put the death penalty into a vote by viva voce on second reading.

The second reading approval would pave the way for the bill to be approved on third and final reading in the next few weeks, with the bill no longer allowed to be amended.

During session, Lagman lamented how the House leadership “flagrantly” violated the House rules when it did not allow them to propose amendments to the bill on a line by line basis.

After the session, Lagman said the House leadership “has fed to shedding machine the rules of the House.”

Lagman said he will make it on record on Wednesday that the House rules have been violated as he prepares to elevate the issue from the “people’s court” to the Supreme Court.

“We will make on record that the rules have been flagrantly violated… We will file to another forum when it’s seasonably right… From the court of the people and then to the Supreme Court,” Lagman said.

Oriental Mindoro Rep. Reynaldo Umali, chairperson of the House justice committee, earlier said the majority is more open to passing the bill if it would be limited to drug-related offenses (except possession of drugs, which will be punished with the maximum offense of life sentence).

With the bill limited to drug-related offenses, it would no longer punish with death the heinous crimes of rape, plunder and treason.

The bill will also give the judge the leeway whether to impose life sentence or the maximum penalty of death on convicts.

The majority caucus initially wanted to remove plunder from the list of heinous crimes, raising criticisms of conflict of interest by lawmakers who do not want to punish with death the non-bailable offense against public officials accused of earning at least P50-million in ill-gotten wealth.

But the caucus again returned plunder on the list after Speaker Pantaleon Alvarez refused to remove the offense from the bill.

The bill, however, stated that the death penalty should not be imposed on children below 18 years old or over 70 years of age at the time of the commission of the crime. The penalty to be imposed on convicts are hanging, firing squad and lethal injection. The bill will also allow the judge the leeway to determine whether to impose death penalty or life imprisonment.