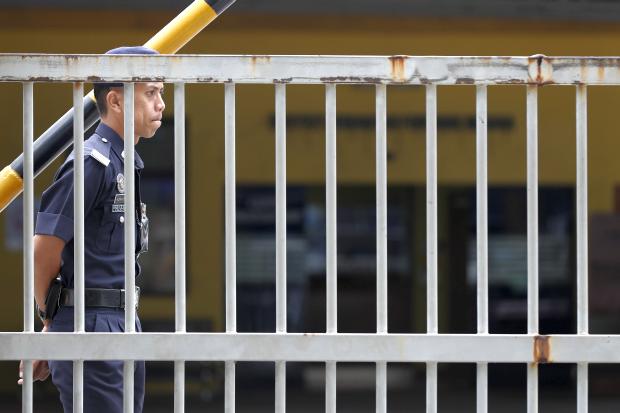 A Malaysian police officer guards the gate of the National Forensic Institute at Kuala Lumpur Hospital in Kuala Lumpur, Malaysia, Wednesday, March 1, 2017. Kim Jong Nam, the estranged half brother of North Korea’s leader, was attacked at a busy Kuala Lumpur airport terminal on Feb. 13 and died shortly after two women went up behind him and wiped something onto his face. North Korea opposed Malaysian officials even conducting an autopsy, while Malaysia has resisted giving up the body without getting DNA samples and confirmation from next of kin. (Photo by VINCENT THIAN/AP)

TOKYO — North Korea is strongly denying the findings of a Malaysian autopsy that suggest the deadly VX nerve agent was used to kill leader Kim Jong Un’s half brother — or “Kim Chol, a citizen of (North Korea) bearing a diplomatic passport,” as its media and officials on the scene insist the victim be called.

North Korea’s state-run news agency on Wednesday said the claim that small amounts of the extremely toxic nerve agent were detected in the corpse was an “absurdity” lacking “scientific accuracy and logical coherence.”

The Korean Central News Agency report came as two young women accused of actually carrying out the attack in a crowded airport lobby on Feb. 13 were charged with murder.

The women – one from Vietnam and the other from Indonesia – arrived in court under the protection of masked special forces carrying machine guns. Both say they believed they were participating in a prank for a TV show and did not know they were involved in a murder.

North Korea has strongly denied any involvement in the killing, though Malaysian police are looking for three North Koreans including the second secretary at the North Korean Embassy. Police have said four other North Koreans who left the country on the same day as the killing provided the VX liquid and put it on the women’s hands before they wiped it on Kim’s face.

In its denial Wednesday, KCNA said it is the “height of absurdity” to claim the two women could have used such a deadly toxin without also killing or sickening themselves and anyone around them.

KCNA also said that if VX is suspected, international conventions on chemical weapons call for the substance to be tested at facilities specializing in such substances. It likened claims by South Korea and the US of North Korean involvement in the killing to claims of “Iraq’s possession of weapons of mass destruction” spread by the US in the 1990s.

Malaysian Health Minister Subramaniam Sathasivam said over the weekend that the dose of VX given to Kim was so high that it caused serious paralysis and killed him within 20 minutes.

Malaysian police said the attackers knew what they were doing and had been trained to go immediately to the bathroom and clean their hands. Police can’t confirm if the two women were given antidotes before the attack. An antidote, atropine, can be injected after exposure and is carried by medics in war zones where weapons of mass destruction are suspected.

North Korea has studiously avoided identifying the victim as anyone other than “Kim Chol,” the name on the passport he was carrying.

Kim Jong Nam had lived in virtual exile from the North for years and few North Koreans outside of those familiar with the ruling family’s inner circle would likely even know of his existence. So news of his murder in Malaysia would be shocking to North Koreans on a number of levels.

But while Malaysia’s deputy prime minister has said the victim was Kim Jong Nam and there seems to be little room for reasonable doubt, other Malaysian officials have been more cautious.

In the written version of the charges, the victim is identified as Kim Chol. Medical officials are hoping to get DNA samples to positively confirm the victim’s identity.

“We don’t have the specimen,” the health minister said at a news conference Wednesday. “We have a body of one person who has got a North Korean passport with the name Kim Chol.” –Eric Talmadge