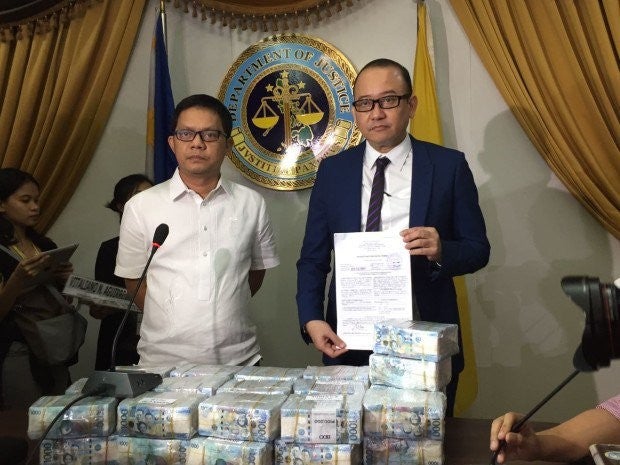 De Lima filed Senate Resolution 258 on Monday directing the Senate committee on accountability of public officers and investigations or the blue ribbon committee to look into the bribery scandal.

Aguirre himself has admitted being offered a P100 million bribe a month by Lam allegedly through the latter’s representative, former police officer Sombrero.

“If indeed Lam, through his middleman Wally Sombero, attempted to bribe Aguirre, why didn’t the latter effect right then and there a warrantless arrest of Sombero, the latter being in flagrante delicto, and thereafter promptly move to prevent Lam’s departure or escape from the country?” De Lima said in a statement.

“Simply put, there are too many nagging questions that necessitate a deeper independent probe by the Senate. We cannot just entrust such investigation to DOJ/NBI (Department of Justice/National Bureau of Investigation) which are both under Aguirre’s control. It’s like entrusting a wolf to guard the sheep,” she said.

De Lima noted Aguirre’s “seeming lackluster response” and “lukewarm” action on Lam’s bribery attempt, saying it was “suspicious and worrisome,” considering that he is the top prosecutorial officer of the government.

She also noted President Rodrigo Duterte’s “kid’s glove” treatment of the Justice Secretary and the two embattled immigration officials, who happened to be his fraternity brothers in the San Beda-based Lex Talionis Fraternity.

“The kid’s glove treatment of the President on Aguirre and his other fraternity brothers for their suspicious handling of the Jack Lam bribery scandal raises issues on the seriousness and/or capability of the government to enforce its anti-corruption laws in situations where those involved are personal friends of the appointing authority,” the senator further said in the resolution.

READ: Duterte: No way frat brothers Argosino, Robles will be reinstated to BI

De Lima, who served as justice secretary in the past administration,  saw the need to revisit anti-corruption laws to ensure that those involved in corruption would not be favored by the disciplining and appointing authority.

“There is a need to review and update our anti-corruption laws to more effectively respond to situations where suspect public officials have a personal relationship to the appointing authority and the chief executor of the nation’s laws,” she said in the statement.