The two officials who voluntarily took a leave of absence turned over to Justice Secretary Vitaliano Aguirre II the remaining P30 million.

“While Deputy Commissioners Argosino and Robles had acknowledged receipt of custody of P48-million on 27 November, 2016 with Wally Sombero getting P2-million as future evidence of corruption of public officials, the series of events that transpired showed a continuing link of corruption involving gambling magnate Jack Lam, his two interpreters Norman Ng and Alexander Yu and General Charles Calima,” Argosino and Robles said in a statement.

The two officials said they could have easily arrested Sombero but opted not to pursue it.

“Why did we not pursue it and consider it [the money] as future evidence because at the time that Wally Sombero met us in the City of Dreams, there are no signs of Jack Lam. We will arrest Wally Sombero but no Jack Lam,” Argosino said in a press conference.

The two officials said they are conducting an investigation on the extent of corruption at the Bureau of Immigration (BI) in favor of Chinese aliens.

“This is a case of continuing investigation regarding the employment of illegal aliens and illegal online gambling operation as well as on how it existence during the past administration would thrive through illegal pay-offs,” the officials said.

“This [P30-million] is the living evidence as to why President [Rodrigo] Duterte must come out in the open to pursue corruption and never allow a business entity to thrive by paying off government officials,” Argosino said.

The two officials boasted that they were the only officials who managed to gather the evidence against Jack Lam.

“It was me and Deputy Commissioner Mike Robles who discovered the only living evidence against Jack Lam that there is pay off in the BI and this payoff continues inside the BI,” Argosino said adding that “we will never be instrumental to any attempts that would prevent the Duterte administration from pursuing the reforms of the Duterte administration,” Argosino said.

Argosino and Robles were accused of extortion by Sombero. A column by Ramon Tulfo revealed that the two officials extorted P50 million in exchange for the release of 600 of the 1,300 Chinese nationals illegally working at Lam’s Fontana Resort.

The two denied the allegations and insisted that they were conducting an investigation.

“We were not born yesterday. We know what we put ourselves in the City of Dreams. Did you think we do not know that the place is crawling with CCTV cameras,” Argosino said.

“We want to have the opportunity to see the extent of corruption at the Bureau of Immigration,” Argosino said.

As a gift to President Duterte, the two said they were the first to file a criminal case against Jack Lam.

The complaint for corruption of public officials and violation of the Anti-Wiretapping Law has been filed before the Parañaque Prosecutors Office.

Aside from Lam, included in the complaint were his interpreters Ng and Yu, Sombero and Calima.

The two said they gave Calima P18 million after he told the two of audio recordings of conversation during the Nov. 27 meeting where the money changed hands.

“We were not able  to arrest Calima [because] we do not have a capability at that time to arrest him,” Argosino said. RAM/rga 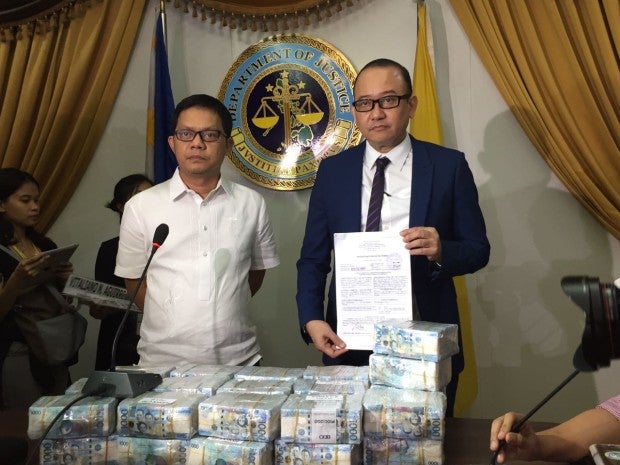