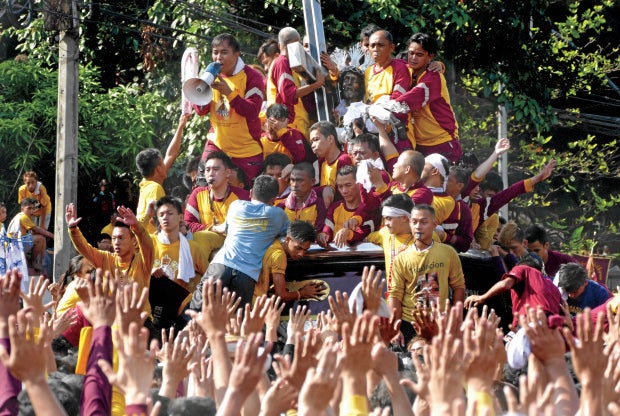 MANILA — Devotees of the Black Nazarene flocked to this year’s “Traslacion” with the hope that their devotion to the cross-bearing Christ would not only free their families of diseases but also put an end to the scourge of vigilante killings that has plagued the country over the last six months.

Melissa Abuedo, 30, joined for the first time on Monday as the Black Nazarene headed back to Quiapo Church from the Quirino Grandstand, praying that the image many believe to possess miraculous powers would relieve
her of the cough and flu she has been enduring for weeks.

And as if to prove the wonders of the centuries-old image, the barefooted Abuedo told the Philippine Daily Inquirer that she already felt better after getting hold of the rope attached to the Black Nazarene’s carriage as it made its way to the Manila City Hall shortly before noon on Monday.

But apart from her well-being, Abuedo expressed hope that the Black Nazarene would prove instrumental in ending the vigilante killings that have hit the country since the Duterte administration launched in July its bloody and brutal war on the illegal narcotics trade.

“I pray that the killings will stop because some are killed because of mistaken identity and many innocent lives end up as collateral damage,” Abuedo said in Filipino, as she recalled that she has already lost neighbors who had earlier turned themselves in to the police as part of the anti-drug campaign “Oplan Tokhang.”

Abuedo added that the country “will not progress” if the killings would remain unabated.

For 60-year-old Danilo Paz, his prayers of good health to the Black Nazarene are not for him but for President Duterte, whom he said has delivered a “good performance,” especially in putting an end to petty crimes.

“Our country is better off now. I no longer worry for my family that they would fall victims to robbers and rapists at night,” Paz said.

He added that since he began his devotion to the Black Nazarene at age 12, his prayers of good health and a good life for his family had always been answered. Nowadays, he has been praying to the cross-bearing Christ to cure Mr. Duterte of his various ailments.

The President earlier said he has been suffering from Buerger’s disease, a persistent migraine. 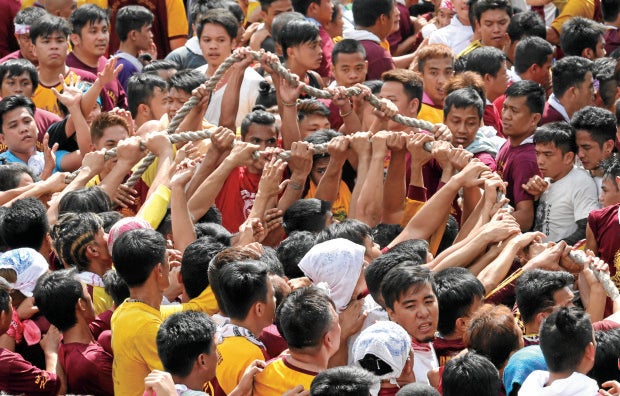 FEAST OF THE BLACK NAZARENE/ JAN 9,2017:  Millions of devotees of the Black Nazarene get hold of the rope connected to the carriage of the holy image during its procession from Manila City Hall to Jones bridge.  INQUIRER PHOTO/JOAN BONDOC

“I pray that he would have a longer life so that he can continue his good work for our country,” Paz said.

Even if he had already lost three cousins to the drug war, Paz said he refused to blame President Duterte for their demise, noting that his relatives’ “ill ways” had finally caught up with them.

He added that the public had nothing to fear despite the more than 6,000 individuals killed in the drug war.

“If you’re not involved in the illegal drug trade, you don’t have to be afraid,” said Paz, who had prayed to the Black Nazarene that none of his seven children would be tempted to use illegal drugs.

Longtime devotee Carolina Valdesco told the INQUIRER that in the more than four decades she has joined the traslacion, she noticed that this year’s crowd appeared to be “more serious” in joining the annual
procession, estimated by police on Monday to have drawn more than 1.5 million devotees past noon.

“It must be because of the various natural calamities that have hit our country. Or it’s because they are praying for intercession that they would be able to live an upright life,” the 64-year-old businesswoman said.

Asked what she prayed for to the Black Nazarene, Valdesco prayed that the drug-related killings would stop.

“I pity the children of those suspected criminals who are left orphaned. I hope that the government would give these parents a chance to change their lives for the better. After all it’s the lack of employment and opportunity that has pushed them [to do whatever they can to earn a living],” she said.  SFM/rga