In town where ‘Nina’ hit land, houses flattened in minutes 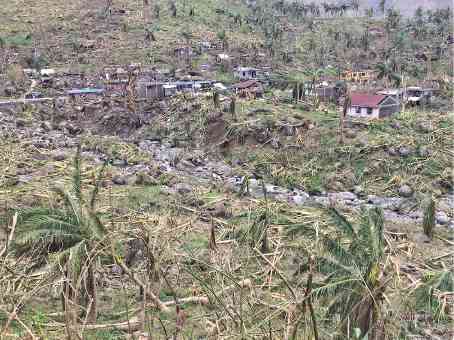 Residents of Sagñay in Camarines Sur province are appealing for help as they rebuild after Typhoon “Nina” left coconut plantations and farms devastated in the coastal town. —SHIENA M. BARRAMEDA

SAGÑAY, Camarines Sur—In this town where Typhoon “Nina” (international name: Nock-Ten) made its second landfall on Christmas Day, residents said it took only several minutes of heavy pounding from strong winds to flatten their coastal community.

A week after the typhoon crossed the Bicol region, the scene in Sagñay, some 43 kilometers from Naga City, the economic hub of Camarines Sur province, was of severe devastation as residents tried to build temporary shelters.

Uprooted ancient trees and electric posts toppled by the typhoon were wrapped with wires snapped by the wind. Blown roofs and debris from houses destroyed by Nina littered the town.

Surrounded by destruction akin to what Supertyphoon “Yolanda” (international name: Haiyan) left in the Eastern Visayas region in 2013, Larry Sotto, 27, a helper in an abaca plantation, started building a hut, using wood and materials salvaged from the family’s destroyed house, to protect his 3-month-old twin girls in Barangay Patitinan.

“Our original house was a lot bigger than this but the typhoon blew it away in just a few minutes,” Sotto said.

Luckily, he had evacuated his wife and four children to a relative’s house a few meters away before the typhoon hit land. He stayed behind, thinking Nina would not be strong enough to destroy his house that stood on the edge of a cliff.

Sotto said the typhoon also destroyed the plantation where he used to earn P50 for every kilogram of abaca he harvested.

Merlinda Versoza, 56, helped a neighbor rebuild her house even as her house was destroyed.

“When the typhoon blew away our roof, we hid under a mattress and prayed,” Versoza said, noting that she and her siblings did not evacuate despite warnings from local officials.

But her biggest concern now is feeding her family after Nina destroyed her farm, where family members source their food. The farm was planted with camote (sweet potato), coconut and vegetables.

“We were still recovering from the impact of Yolanda. I just planted those crops and was expecting a bountiful harvest when [the typhoon hit our town],” she said.

Records from the Department of Social Welfare and Development in Bicol as of Jan. 2 showed that of 200,079 houses destroyed and damaged by the typhoon in the region, some 126,534 were in Camarines Sur.

The Office of Civil Defense in the region said crop losses reached P4.1 billion, half of which, at P2.2 billion, represented damage in rice production.

The Department of Public Works and Highways, as of Dec. 31, said damage to roads, bridges, flood control projects, seawalls and government buildings in the region was at P301 million.

The typhoon destroyed P1.1 billion worth of school buildings and education materials worth P34.8 million.

Classes in public schools in the second to fifth congressional districts of Camarines Sur are suspended until Jan. 9 due to extensive damage to school buildings in these areas, said Arnulfo Balane, schools division superintendent.

Classes in the first congressional district, which was spared by the typhoon, opened on Tuesday.

On Monday, Rosebelle Oliveros, 39, walked barefoot by the highway near her community in Barangay Sta. Teresita in Baao town, waiting for supply of relief goods.

“We haven’t received any assistance. We survive on whatever we could put together,” she said of the cooperation of about 80 households in her community.

Oliveros said they barely had enough food to share on New Year’s Eve.

She and her five children evacuated to the house of barangay councilwoman Adoracion Bajande with more than 10 other families.