“Sa Ma-a, siguro pitong beses (In Ma-a perhaps seven times),” Matobato told an Inquirer.net team on Monday in an interview in a safe house, referring to a district in Davao City.

He said the killings happened between 1998 and 2000. But he could neither give details of the seven nighttime incidents in the gravel quarry on the outskirts of the city nor the identities of the victims. He suggested some of the victims were criminals.

He could only remember details of the killing of Mr. Duterte’s alleged eighth victim, a National Bureau of Investigation agent he identified only as “Amisola.”

Matobato said the DDS was going after kidnappers when the group came upon Amisola’s vehicle blocking a narrow street. He said one of Mr. Duterte’s men got into an altercation and then a gunfight with Amisola.

He said Amisola, who rolled under his pickup truck as he was being shot, was killed by Mr. Duterte, who emptied two Uzi magazines on the NBI agent.

The Inquirer could not independently confirm Matobato’s allegations.

Matobato, 57, who has been shuttled to different safe houses in the past months because he fears for his life after publicly testifying against the President in a Senate hearing in September, sat on a green monobloc chair at the edge of a small shed where his wife cooked his meals.

Behind him is a piece of land that slopes downward, into a narrow stream—the only background the team was allowed to shoot on video.

Asked if he had firsthand knowledge of Mr. Duterte killing people, he said, “Marami na (There’s been a lot.)”

“Minsan gabi yun pumupunta basta pinakaimportante ang binabaril (Sometimes, he went to the quarry at night if the person to be shot was someone important),” he said.

“Hindi namin alam ang pangalan (We did not know the names),” he said of the victims, who were all male.

“Pumupunta yan. Sya ang bumabaril. Nakaupo ang tao (He would go there. He would fire while the person was seated).”

During the Senate justice committee inquiry on extrajudicial killings, senators made fun of Matobato as he narrated how Mr. Duterte killed the man using an Uzi submachine gun. 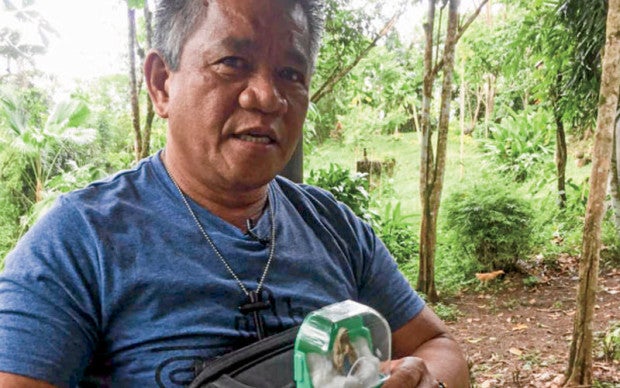 DIVINE GUIDANCE? Edgar Matobato holds an image of the Virgin Mary while being interviewed at his safe house by an Inquirer.net team about his killing missions. —KRISTINE ANGELI SABILLO

Last week, Matobato was interviewed by CNN for an exclusive report where he basically recounted his testimony in the Senate, implicating Mr. Duterte in the alleged activities of the DDS.

Matobato said he never saw Paolo Duterte, the President’s eldest son and now Davao City vice mayor, shoot a man. But he said Paolo asked the DDS to kill some of his enemies, including a man he argued with at a gas station.

Asked if Mr. Duterte’s other children were involved with the DDS, he said no.

Matobato said his first kill, shortly after the DDS was formed by then Mayor Rodrigo Duterte, involved shooting a suspected robber at a billiard hall called Lucky 13.

He said he simply walked up to the man and shot him at close range as bystanders ran in fear.

He said he did not wear a mask. He said in Davao City, he had nothing to fear because he was with the police.

Matobato said the people could choose to believe him or not but he said the increasing number of people being killed nationwide was proof of the existence of groups like the DDS.

Since Mr. Duterte became the President, more than 6,000 people have been killed in the war on drugs. A large number of the deaths are attributed to vigilante groups or unidentified gunmen.

He said the problem was that those killed were small-time drug pushers. He said the DDS did not kill any drug lord in Davao City.