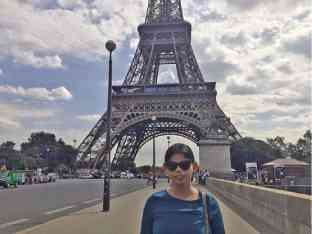 Katchry Jewel Golbin in front of the Eiffel Tower in Paris. —Photo from Golbin’s Facebook

ILOILO CITY—Blind singing sensation Katchry Jewel Golbin has come home a celebrity in Capiz province even as she continues to receive invitations to perform abroad.

Golbin, also known as “Alienette Coldfire,” has been recognized by the Capiz provincial government and the Tapaz town government for placing third in this year’s edition of “France Got Talent” television program.

Golbin, who is blind since birth, awed judges and audience of the 11th season of the television program, “France Got Talent,” for her rendition of French songs despite being a nonnative.

She learned to speak French by enrolling in an elective subject at Central Philippine University in Iloilo City, where she earned her English degree. She also practiced speaking French with friends through online conversations.

Her dedication to learn French was prompted by her wish to understand the international hit “La Vie en Rose,” sung by one of her idols, French singer Edith Piaf.

She landed on the top three in the contest’s finale held on Dec. 12, edging more than 100 participants.

Golbin, 26, the eldest of three siblings, earlier said making the show’s finale alone was already “beyond [my] wildest dreams.”

She returned to Roxas City on Dec. 21 with her younger sister, Kathryne Faith, who accompanied her in her trips to France.

She came home to Tapaz with a motorcade from Roxas City before a program was held at the town’s civic center where she was given a plaque of recognition.

Her mother Estrella said members of the Filipino community in France have invited Golbin to return and perform next year.