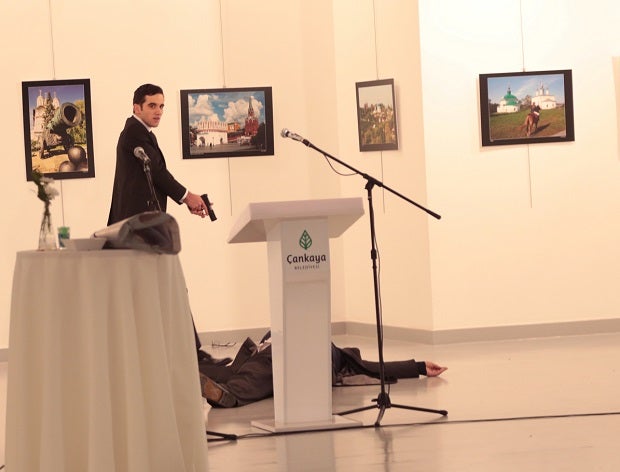 An unnamed gunman gestures after shooting the Russian Ambassador to Turkey, Andrei Karlov, at a photo gallery in Ankara, Turkey, Monday, Dec. 19, 2016. The Russian foreign ministry spokeswoman said he was hospitalized with a gunshot wound. (AP Photo/Burhan Ozbilici)

ANKARA—“Don’t forget Aleppo! Don’t forget Syria!” the man shouted in Turkish, standing near the body of Russian Ambassador to Turkey Andrei Karlov, whom he had shot in the back.

The gunman then yelled: “Stand back! Only death will take me out of here. Anyone who has a role in this oppression will die one by one.”

Then he shouted: “Allahu akbar (God is great)!”

Minutes later, the gunman lay dead, “neutralized” in a police operation inside the hall after 15 minutes of clashes when he refused to surrender.

Dramatic footage showed the moment the man shot Karlov in the back as the veteran diplomat opened a show of Russian photographs at an Ankara exhibition center on Monday.

Images showed the ambassador standing up to speak at a lectern, before stumbling and crashing to the ground as shots ring out, lying flat on his back as the gunman, dressed in a dark suit and tie, brandishes his gun at shocked onlookers.

An Associated Press (AP) photographer in the audience said the killer fired at least eight shots.

Turkish Interior Minister Süleyman Soylu identified the attacker as Mevlut Mert Altintas, 22, who had worked in the Ankara riot police for the last two and a half years.

Altintas had used his police ID to gain entry into the exhibition center, news reports said.

His mother, father and sister were reportedly detained for questioning at their home in the western province of Aydin.

His flatmate in Ankara was also detained.

World leaders condemned the assassination of Karlov as a cowardly attack.

The United Nations called it a “terrorist attack” and demanded the perpetrators, organizers and sponsors be brought to justice.

A statement on Monday night from the UN Security Council reaffirmed that all forms of terrorism posed one of the most serious threats to international peace and security.

“Any acts of terrorism are criminal and unjustifiable, regardless of their motivation, wherever, whenever and by whomsoever committed,” the council said.

The council also stressed “the fundamental principle of the inviolability” of diplomats under the 1961 Vienna Convention on Diplomatic Relations and reaffirmed the need to combat threats to international peace and security caused by terrorist acts.

Russian President Vladimir Putin called the assassination of Karlov a “provocation” aimed at sabotaging warming ties between Moscow and Ankara and efforts to resolve the conflict in Syria.

“There can be only one answer to this—stepping up the fight against terrorism, and the bandits will feel this,” Putin said at a meeting with Russia’s foreign minister and the heads of the overseas and domestic intelligence agencies.

“We have to know who directed the hand of the killer,” Putin said.

Turkish President Recep Tayyip Erdogan echoed Putin’s comments, saying the killing was aimed at wrecking a normalization process that had taken root after a crisis sparked when Turkey shot down a Russian plane over Syria.

US President-elect Donald Trump condemned the assassination, calling the gunman a “a radical Islamic terrorist.”

Karlov, 62, was a career diplomat. He joined the diplomatic service in 1976.

He served as Russia’s ambassador to Pyongyang in 2001-2006, and later worked as the chief of the Russian foreign ministry’s consular department. He had served as the ambassador to Turkey since 2013.

His assassination came after days of protests by Turks angry over Russia’s support for the Syrian government in the conflict and the Russian role in the killings and destruction in the northern Syrian city of Aleppo.

The killing, an embarrassing security failure in the Turkish capital, forced Turkey and Russia to confront a new crisis tied directly to the Syrian conflict, now in its sixth year.

The longer-term implications for the warming Russia-Turkey relationship were not immediately clear.

But some analysts played down the notion that the assassination would lead to a new rupture, saying it could conversely bring the countries closer together in a shared fight against terrorism.

Russian Foreign Minister Sergei Lavrov said in a statement that a meeting in Moscow on Tuesday between the foreign ministers of Iran, Turkey and Russia would adopt tangible measures on Syria.

“We will take measures at this meeting that will make it impossible for those who nurtured the people who ordered and organized this crime to realize their plans,” Lavrov said.

While it was too early to tell if Altintas acted alone, his use of jihadist slogans and his invocation of Syria raised the possibility that he was a member, or at least a sympathizer, of an Islamist group like al-Qaida’s Syria affiliate or the Islamic State group, two organizations that Turkey has been accused by allies, including the United States, of supporting in the past.

Russia’s foreign ministry spokesperson Maria Zakharova told the Rossiya 24 news channel that Karlov had died of his wounds in what she described as a terrorist attack.

Turkey’s interior ministry said the ambassador had died at Guven Hospital in Ankara.

Russian news agencies said the ambassador’s wife fainted and was hospitalized after learning of her husband’s death.

They also said that as a precaution, Russian tourists in Turkey had been advised against leaving their hotel rooms or visiting public places.

The United States closed its missions to Turkey for a day on Tuesday, reminding US citizens in the country to “maintain a high level of vigilance.” —REPORTS FROM AP, AFP AND NEW YORK TIMES NEWS SERVICE/TVJ