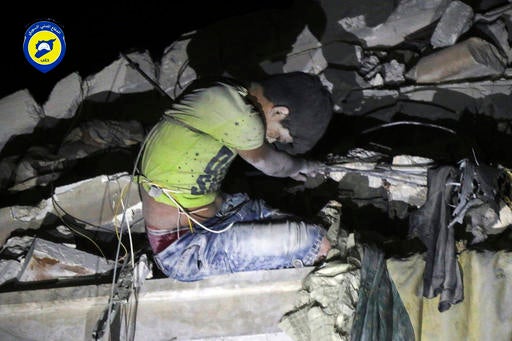 In this photo released early Monday, Oct. 17, 2016 and provided by the Syrian Civil Defense group known as the White Helmets, rescue workers trying to remove a boy stuck in the debris of a building in the neighborhood of Qaterji in rebel-held east Aleppo following an airstrike in Aleppo, Syria. Syrian activists are reporting that airstrikes on a rebel-held, eastern neighborhood in the city of Aleppo have killed at least 13 people, including children. The Britain-based Syrian Observatory for Human Rights says the airstrikes hit the Marjeh neighborhood. (Syrian Civil Defense White Helmets via AP)

UNITED NATIONS—The Russian and Syrian bombing raids in Aleppo have had horrific results with nearly 500 dead, while food rations are expected to run out by the end of the month, UN Secretary-General Ban Ki-moon said Thursday.

The air strikes on rebel-held eastern Aleppo since the Syrian government offensive was launched on September 22 have been the most intense of the five-year war, Ban told a special meeting of the General Assembly.

“The results have been horrific”, he said.

Nearly 500 people have been killed and about 2,000 injured. More than a quarter of all deaths are children.

No UN aid convoy has entered Aleppo since July 7 and food rations will run out by the end of October, Ban warned, saying hunger was being used as a weapon of war.

The meeting at the General Assembly was called by 72 countries led by Canada to try to break the deadlock after the Security Council failed to take action to end the bombings and revive peace efforts.

Two resolutions were defeated during a stormy council session earlier this month, one of which was vetoed by Russia, which is backing the Syrian regime in its war against opposition fighters and jihadists.

Russian Ambassador Vitaly Churkin said he was “puzzled” by the statements at the meeting because they failed to mention the urgent need to combat terrorism in Syria.

Churkin said Ban and others had not pronounced “a single word to talk about terrorist organizations, as if the disaster in Syria was like the hurricane that hit Haiti.”

Russia has long maintained that it is supporting the regime of President Bashar al-Assad in a war against the Islamic State and Al-Qaeda-linked jihadists, both designated as terror organizations by the United Nations.

US Ambassador Samantha Power shot back.

“Let us be real: terrorists are not the ones dropping bunker-busting bombs on hospitals and civilian homes in eastern Aleppo, nor are they besieging civilians there,” she said.

“The Assad regime and Russia are.”

Canada’s Foreign Minister Stephane Dion called for a formal emergency session of the General Assembly to discuss urgent measures that could be taken by the 193 UN member-states.

It remained unclear what concrete action the assembly — whose resolutions are non-binding — could take to address the humanitarian crisis in Syria.

The gathering was seen by some diplomats as an attempt to turn up the pressure on Russia and Syria to halt the bombing of Aleppo.

Russia this week declared a humanitarian pause in the assault on eastern Aleppo, where more than 250,000 civilians have been trapped, under near-continuous siege since July.