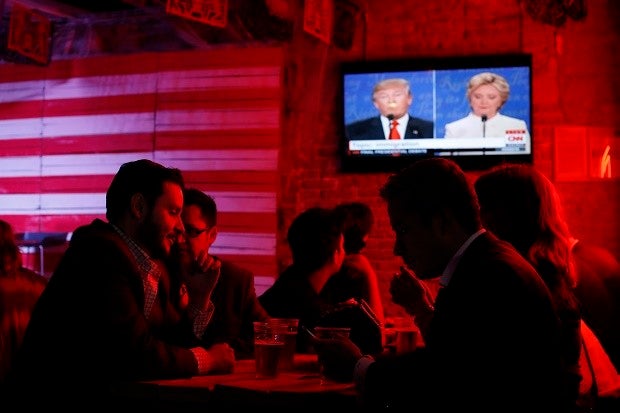 Customers watch the third and last U.S. presidential debate at the Pinche Gringo BBQ restaurant in Mexico City, Wednesday, Oct. 19, 2016. The debate is being held in Las Vegas. AP

PHOENIX — Donald Trump’s utterance of “bad hombres” offended some of the millions of people watching the final presidential debate, who called it racially divisive.

Within minutes of using the phrase Wednesday evening, the Republican presidential nominee was getting a lashing about his mishmash of English and Spanish.

“We have some bad hombres here, and we’re gonna get ’em out,” said Trump, whose rise to the party nomination was fueled in part by his plan to build a wall at the US-Mexico border. He blamed these “hombres,” (OHM-brays) Spanish for men, for drug epidemics around the US.

Trump has worked to broaden his appeal to Hispanics, promising a better life if he’s president.

But to some voters, it’s a lost cause.

Taylor Brandreth watched the debate while visiting in Bradenton, Florida. He backed Trump in the primary in Virginia, where he works as a government consultant, but that was mainly to block Sen. Marco Rubio from clinching the GOP nomination. Now he’s a Hillary Clinton supporter, and it’s largely because of what he considers Trump’s racially divisive tactics, including the use of “Spanglish.”

“I speak Spanish fluently. I have to honestly say, listening to it, my jaw just instantly dropped because it was like a taunt,” said Brandreth, 27. “There was nothing good in the context. It was like, ‘Let me say something awful and racist and let me butcher this other language while I’m doing it.'”

Alanna Conti, a 25-year-old graphic designer who watched the debate at home in rural Sweet Valley, Pennsylvania, said she wanted to hear about policy and not jabs by the candidates. On the “bad hombres” comment, she said it shows Trump “knows how to be himself.”

Retired University of Florida professor Gerald Murray, who has done anthropological studies in the Dominican Republic and Haiti and wrote a paper on “Spanglish,” said Trump borrowed a word from another language — but maybe not one many people recognize.

“Technically, it’s not Spanglish,” Murray said. “When you use the word hombre, you’re using it to convey some emotional connotation” — often that of a tough guy.

Political commentator Ana Navarro, a Republican who often criticizes Trump, offered a Spanish lesson via the social media outlet. To some, it sounded like Trump said “bad hambres” (AHM-brays).

At a Mexico City barbecue restaurant, an assortment of Mexicans and expats guffawed at “bad hombres.”

“I think the way that Trump has talked about Mexicans from the start of the campaign is to call them rapists, criminals, he hasn’t changed,” Santiago Betancourt said at Pinche Gringo BBQ, where about 200 people gathered to watch the debate. “Trump maybe echoes or uses arguments that exist among an American class that he’s betting can make him president. I don’t think it’s a presidential discourse.”

For others, “bad hombres” was plain confusing.

Take Hussein Kazwini, a 22-year-old community college student who watched in Toledo, Ohio. He’s a first-generation American whose parents came to the United States from Lebanon 30 years ago. In November, he’ll vote in his first presidential election.

“What does that even mean?” Kazwini said. “I guess he’s trying to send them a direct message.”