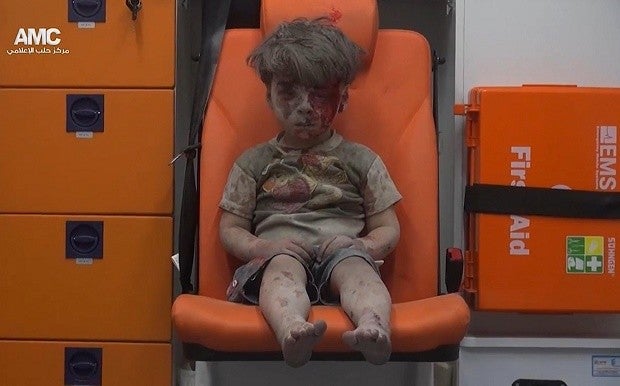 In this frame grab taken from video provided by the Syrian anti-government activist group Aleppo Media Center (AMC), four-year-old Omran, sits in an ambulance after being pulled out or a building hit by an airstrike, in Aleppo, Syria, on Aug. 17, 2016. His older brother, Ali, 10, has reportedly died of his wounds. AP FILE

BEIRUT, Lebanon — The older brother of the little Syrian boy who was pictured sitting in an ambulance dazed and covered in blood after an air strike, died Saturday from wounds sustained in the attack on the family’s apartment, a monitoring group said.

“Ali, aged 10, succumbed to his injuries. He was badly wounded in the same bombardment as Omran on August 17 in Aleppo,” the Syrian Observatory for Human Rights said.

The haunting images of four-year-old Omran, sitting in an ambulance after the attack, his face, arms and legs caked in blood and dust, have reverberated around the world, becoming a symbol for the suffering of children in Syria’s brutal five-year conflict.

In video footage from the incident, Omran is seen quietly staring into space before raising his arms to touch his bloodied forehead, then looking at his hand and wiping it on the orange seat.

Omran, his siblings and parents were all plucked from the rubble wounded, but alive, following Wednesday’s bombing on the Qaterji neighborhood in rebel-held east Aleppo.

The Aleppo Media Centre, a network of activists in the divided northern city, confirmed Ali’s death in a video on Saturday.

The images of Omran have sparked a global outcry, much like the photo last September of three-year-old Syrian boy Aylan Kurdi, whose body washed ashore on a Turkish beach as his family tried to reach Europe.

More than 290,000 people have been killed since Syria’s conflict broke out, including nearly 15,000 children.

Omran’s home city Aleppo has been divided by government control in the west and opposition fighters in the east since 2012.

Of the estimated 250,000 people still living in the eastern parts of the city, 100,000 are children, according to the UN’s children agency UNICEF.