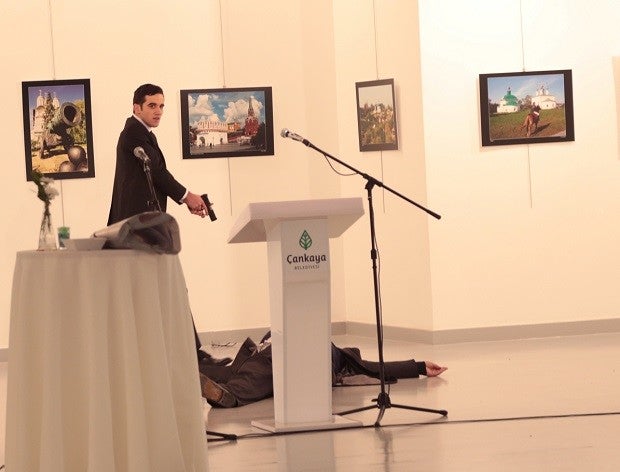 A Turkish policeman identified as Mevlut Mert Altintas stands over the fallen Russian Ambassador Andrei Karlov, whom he shot at a photo gallery in Ankara, Turkey, Monday, Dec. 19, 2016. The Russian foreign ministry spokeswoman said Karlov was hospitalized with a gunshot wound but succumbed to his wounds. AP

ANKARA, Turkey — A Turkish policeman crying “Aleppo” and “Allahu Akbar” shot dead Russia’s ambassador to Turkey in Ankara Monday, prompting a vow from President Vladimir Putin to step up the fight against “terrorism.”

Andrei Karlov died of his wounds after the shooting, which occurred on the eve of a key meeting in Moscow between the Russian, Turkish and Iranian foreign ministers on the Syria conflict.

Dramatic footage showed the moment the veteran diplomat was shot in the back as he opened a show of Russian photographs at an exhibition hall in Ankara.

Images showed the ambassador standing up to speak at a lectern, before stumbling and crashing to the ground, lying flat on his back as the attacker — dressed in a dark suit, white shirt and tie — brandishes his gun at shocked onlookers.

The man shouts “Allahu Akbar” (“God is greatest”) and then talks about pledging allegiance to jihad in Arabic, the images showed.

The terrified guests meanwhile cower behind tall cocktail tables laid out for the exhibition opening.

The state-run Anadolu news agency said the gunman had been “neutralized” in a police operation inside the hall after 15 minutes of clashes when he refused to surrender.

Turkish Interior Minister Suleyman Soylu identified the attacker as Mevlut Mert Altintas, 22, who had worked in the Ankara anti-riot police for the last two-and-a-half years.

Reports said that his mother, father and sister were immediately detained for questioning in their home in western Turkey.

The killing came after days of protests in Turkey over Russia’s role in Syria, although Moscow and Ankara are now working closely together to evacuate citizens from the battered city of Aleppo.

Putin called the killing of Russia’s ambassador a “provocation” aimed at sabotaging warming ties between Moscow and Ankara and efforts to resolve the conflict in Syria.

“There can be only one answer to this — stepping up the fight against terrorism, and the bandits will feel this,” Putin said at a meeting with Russia’s foreign minister and the heads of the overseas and domestic intelligence agencies.

“We have to know who directed the hand of the killer,” Putin said.

Turkish President Recep Tayyip Erdogan echoed Putin’s comments, saying the killing was aimed at wrecking a normalization process that had taken root after a crisis sparked when Turkey shot down a Russian plane over Syria.

UN Secretary-General Ban Ki-moon on Monday said he was “appalled by this senseless act of terror.”

James Nixey, head of the Russia and Eurasia program at Chatham House think tank in London, said Moscow would use the attack to step up actions in what the Kremlin sees as a “war on terror”.

“My sense it that the Russians won’t blame the Turks for this but will seek to capitalize on it for wider gains,” he said.

“Clearly the Russian military will be baying for blood, they’ll want revenge.”

The shooting took place at the Cagdas Sanatlar Merkezi, a major art exhibition hall in the Cankaya district of Ankara where most foreign embassies are located, including Russia’s.

“When the ambassador was delivering a speech, a tall man wearing a suit, fired into the air first and then took aim at the ambassador,” Hurriyet correspondent Hasim Kilic, who was at the scene, told AFP.

“He said something about Aleppo and ‘revenge’. He ordered the civilians to leave the room. When people were fleeing, he fired again.”

Hurriyet said Karlov was the first ambassador to be assassinated in Turkey, although the British consul was killed in an Istanbul bombing in 2003 and Israel’s consul general was kidnapped and shot dead by leftist militants in 1971.

Protesters in Turkey have held Moscow responsible for human rights violations in Aleppo with thousands protesting outside the Russian consulate in Istanbul.

Turkey and Russia stand on opposite sides of the Syria conflict with Ankara backing rebels trying to topple Moscow’s ally President Bashar al-Assad.

But the rhetoric has warmed considerably since a reconciliation deal was signed earlier this year and a Russian and Turkish-brokered accord has helped the evacuation of citizens from Aleppo in the last days.

Foreign Minister Mevlut Cavusoglu learned of the news while on the plane to Moscow but insisted the meeting would go ahead as planned. “I was deeply shocked,” the visibly shaken minister said in comments on Turkish television.