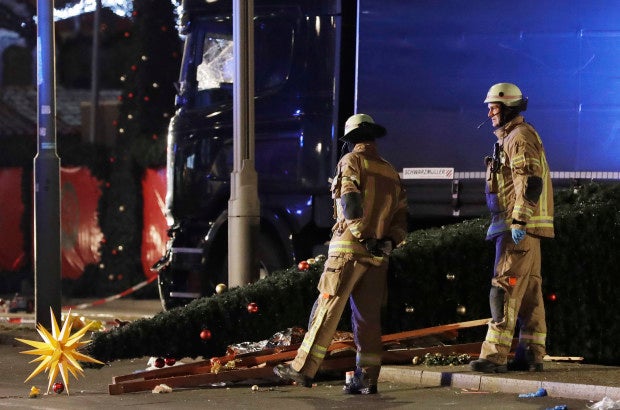 Firefighters look at a toppled Christmas tree after a truck ran into a crowded Christmas market and killed several people in Berlin, Germany, Monday, Dec. 19, 2016. AP

BERLIN—Police said on Tuesday that the driver who rammed a truck into a crowded Christmas market in the heart of the German capital, killing at least 12 people and injuring nearly 50, did so intentionally and that they are investigating a suspected “terror attack.”

The truck struck the popular Christmas market outside the Kaiser Wilhelm Memorial Church late Monday as tourists and locals were enjoying a traditional pre-Christmas evening near Berlin’s Zoo station.

“Our investigators are working on the assumption that the truck was intentionally driven into the crowd at the Christmas market on Breitscheidplatz,” Berlin police said on Twitter.

“All police measures concerning the suspected terror attack at Breitscheidplatz are being taken with great speed and the necessary care,” they said.

Chancellor Angela Merkel reacted quickly to the attack, with spokesperson Steffen Seibert tweeting: “We mourn the dead and hope that the many people injured can be helped.”

In Washington, White House National Security Council spokesperson Ned Price said the United States was in contact with German officials and ready to help in the investigation and response.

US President-elect Donald Trump blamed “Islamist terrorists,” though it was unclear what that assessment was based on.

He said Islamic extremists must be “eradicated from the face of the earth” and pledged to carry out that mission with all “freedom-loving partners.”

German officials said shortly after the attack that it was too early to call the crash intentional.

“I don’t want to use the word ‘attack’ yet at the moment, although a lot speaks for it,” Interior Minister Thomas de Maiziére told ARD television.

“There is a psychological effect in the whole country of the choice of words here, and we want to be very, very cautious and operate close to the actual investigation results, not with speculation,” he added.

The crash came less than a month after the US Department of State called for caution in markets and other public places across Europe, saying extremist groups including Islamic State and al-Qaida were focusing “on the upcoming holiday season and associated events.”

The Islamic State group and al-Qaida have both called on followers to use trucks in particular to attack crowds.

On July 14, a truck plowed into Bastille Day revelers in the southern French city of Nice, killing 86 people.

The Islamic State claimed responsibility for that attack, which was carried out by a Tunisian living in France.

Authorities on Twitter urged people to stay away from the area and to keep the streets clear for rescue vehicles.

Australian Trisha O’Neill told Australian Broadcasting Corp. that she was only meters from where the truck smashed into the crowded market and saw “blood and bodies everywhere.”

“I just saw this huge black truck speeding through the markets, crushing so many people, and then all the lights went out and everything was destroyed,” O’Neill said.

“I could hear screaming and then we all froze. Then suddenly people started to move and lift all the wreckage off people, trying to help whoever was there,” he added.

“We heard a loud bang,” Emma Rushton, a tourist, told CNN. “We started to see the top of an articulated truck, a lorry … just crashing through the stalls, through people.”

Christmas decorations protruded from the smashed windscreen of the black truck, which was resting lopsided on the pavement with a mangled Christmas tree under its wheels.

Police said the truck made it as far as 80 meters (87 yards) into the Christmas market before it came to a halt.

Among the dead was a man in the truck, who succumbed as paramedics treated him, Berlin police spokesperson Winfried Wenzel said.

Police said later that the man was a Polish national, but did not give further details.

A suspect believed to be the driver was picked up about two kilometers away, near the Victory Column monument.

Berlin’s public radio station RBB-Inforadio reported that the suspect was a Pakistani citizen who entered Germany on Dec. 31, 2015.

RBB-Inforadio cited unnamed security sources in its report, which concurred with those in other German media.

Berlin police declined to confirm the reports, but Wenzel said the man was being interrogated.

Berlin police said on Twitter they were investigating leads that the truck had been stolen from a construction site in Poland.

The Polish owner of the truck said he feared the vehicle may have been hijacked.

Ariel Zurawski said he last spoke with the driver, his cousin, around noon, and the driver told him he was in Berlin and scheduled to unload on Tuesday morning.

“They must have done something to my driver,” he told TVN24.

Up to 250 German police officers have searched the now-defunct Tempelhof airport used as a shelter for asylum-seekers in Berlin in response to the attack, the DPA news agency reported on Tuesday. —REPORTS FROM AP, AFP/TVJ