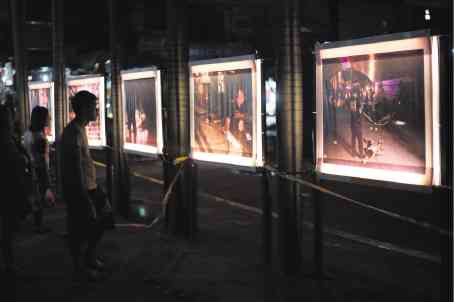 These framed images line the entrance to Redemptorist Church in Baclaran, Parañaque City, in a photo exhibit that will run through Christmas Eve to make the faithful reflect on the killings brought about by the Duterte administration’s war on drugs.

Fr. Joseph Echano, rector of the National Shrine of Our Mother of Perpetual Help, said the gruesome pictures—made more stark by its venue and  timing for the Simbang Gabi (Dawn Mass) crowd—had been drawing varied reactions from churchgoers since the display was put up on Sunday.

“We would agree very much that Christmas is about joy. And we want to root that joy in Christ, not the fleeting, escapist joy that the world gives,” Echano said in an Inquirer interview.

“To be aware of the dirt, the mud, the mess that we are in now. And to say no to that dirt and rise up and come to the light, that’s the real joy that we want,” he said. “People are politicizing (this project). But we’ve never been into politics in the sense of personality politics. We’re into politics that is the movement and action of people for justice, for freedom, for human rights.”

Shots from the nightshift

The exhibit was mounted by photojournalists who had been covering the night shift and documenting the killings since the start of the Duterte administration, when the body count started rising.

(A gunshot usually starts a war or ends one. But with a click of the camera, the stories unfolding in the war’s darkness are exposed—corpses strewn about on alleys and sidewalks, the foul smell of blood and asphalt wafting in the predawn air, the anguish of a widow, the fear among children suddenly robbed of a future.)

“Others may be bothered (by this project) because Christmas should be a happy occasion. But we could also reflect on this: What kind of Christmas will the widows and orphans have? ” said Santiago, one of the participating photographers.

The Redemptorist Church is working with the United Church of Christ in the Philippines and some relatives of the victims in a movement to document the killings and help the families, Santiago said.

On Sunday, through the Rise for Rights project, they hosted a story-sharing and gift-giving activity in Barangay Silangan, Quezon City, for some of the victims’ families.

Funeral assistance is also being given to the indigent, like the family of Domingo Mañosca and his 5-year-old son Francis who were killed by a gunman in Barangay Sto. Niño in Pasay City last week.

Two stalls in the bazaar set up inside the church compound are being manned by families of drug war victims, selling puto-bumbong, lugaw, and other street food. Proceeds will go to an aid fund for other grieving families.

“(With the exhibit) we want to achieve a kind of openness, (for people) to be moved by what’s happening and to believe once again. I think we’ve lost that sense of reverence for life, the sense that we are all human beings,” Echano said.

“People have become complacent and unmoved, no longer scandalized by the killings,” the rector added.

The church, he stressed, condemns the killings as its mission is to defend the sanctity of life from birth to natural death. “We do not believe in taking one’s life even in the name of a drug war. But we are against drugs and we have responded to the issue of drugs even before President Duterte began his term.”