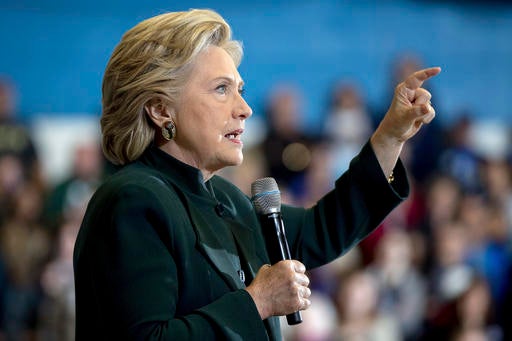 CLEVELAND—Hillary Clinton excoriated rival Donald Trump as a threat to American democracy Friday for not pledging to honor results of the upcoming presidential election, as the bitter rivals battled for supremacy in battleground states.

The 2016 election cycle pitting the Republican nominee against the former secretary of state has turned increasingly toxic, with Trump fueling wild conspiracy theories about vote “rigging” and Clinton warning that the provocative billionaire was straying into authoritarianism.

“We know the difference between leadership and dictatorship, and the peaceful transition of power is one of the things that sets us apart,” Clinton told a rally in Cleveland, Ohio, one of the key swing states up for grabs on November 8.

“Donald Trump refused to say that he’d respect the results of this election. By doing that, he’s threatening our democracy.”

Her comments marked a stern rebuke to Trump’s bombshell suggestion during their third and final presidential debate that he may not recognize the election result — a surprising rejection of political norms.

Trump, 70, then told a rally crowd that he could launch a legal challenge if Clinton prevails.

His remarks follow weeks of Trump warning about the likelihood of a “rigged” election including massive voter fraud, despite members of his own party disavowing the comments and Trump earning condemnation from President Barack Obama.

Despite isolated allegations of voter fraud, controversy over the tight 2000 vote and rampant gerrymandering, US elections have been regarded as free and fair.

Invigorated by both her commanding poll numbers and Trump’s eyebrow-raising declarations, the candidate vying to become America’s first female president was in Ohio aiming to block Trump’s efforts to claim the blue-collar heartland state.

Trump, well aware that no Republican has ever won the White House without winning Ohio, campaigned in the Buckeye State Thursday.

“Eighteen days. You’re going to look back at this election and say this is by far the most important vote you’ve ever cast for anyone at any time,” Trump told a crowd in Fletcher, North Carolina.

“We’re fighting this juggernaut…. because they have billions of dollars they’ve raised,” he said of the Clinton campaign, which reportedly has outspent Trump on television advertising in recent months.

Trump said he would give the campaign everything he had, “right up until the actual vote.”

“Win, lose or draw… I will be happy with myself,” he added. “I don’t want to think back if only I did one more rally I would have won North Carolina by 500 votes instead of losing it by 200 votes, right?”

Clinton is narrowly leading in polling in North Carolina, a state Obama won in 2008 but lost to Republican Mitt Romney in 2012.

Clinton and Trump are coming off an evening of stinging humor at a white-tie charity event in New York where they traded jokes and jabs at what is meant to be a friendly roast — and where Trump was booed.

The bitterness of the campaign was quickly on display, with Trump calling the 68-year-old Clinton “corrupt” and jabbing her for disclosures from her campaign’s hacked emails.

“Here she is in public, pretending not to hate Catholics,” he said, as Cardinal Timothy Dolan of New York looked on.

Despite the prickly barbs — including Clinton proclaiming that Trump sent “a hearse” to bring her to the dinner — the two candidates shook hands at the end of the evening.

Trump is trailing badly in the polls, and his debate threat opened him up to a stinging attack from Obama at a Miami rally.

“When you try to sow the seeds of doubt in people’s minds about the legitimacy of our election, that undermines our democracy,” Obama said Thursday.

“When you suggest rigging or fraud without a shred of evidence, when last night at the debate, Trump becomes the first major party nominee in American history to suggest that he will not concede despite losing… that is not a joking matter.”

In the battle of the battlegrounds, Clinton holds leads in several states, ranging from razor-thin, such as in North Carolina, to moderate in Florida and Pennsylvania and commanding in Virginia.

She is even narrowly ahead in Arizona, the traditionally Republican-leaning state where First Lady Michelle Obama — who galvanized voters with a searing attack on Trump last week — campaigned for Clinton on Thursday.

If Trump loses Florida, Pennsylvania and North Carolina, Clinton is all but assured of victory, experts have said.

In Johnstown, Pennsylvania, Trump supporters streamed into a convention center to hear Trump speak in their depressed former steel town, where most mill jobs have evaporated.

Trump promised that he would bring many of them back.