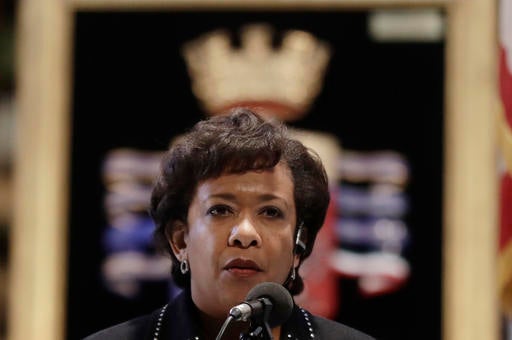 Speaking in Rome just before Trump’s latest controversial comments on the subject, the top US justice official said there was no reason to think that there was a realistic risk of false ballots being cast in significant numbers, voters being impeded or counts being falsified.

Trump has repeatedly claimed the American establishment is so desperate for Clinton to win the election that the result could somehow be doctored in her favor.

In his latest comments, in Delaware, the Republican White House hopeful said Thursday he would accept a “clear election result” next month, but reserved the right to legally challenge the outcome if he felt it was “questionable,” sticking to an unprecedented defiance of US democratic norms that has drawn broad-based criticism.

Lynch, asked about similar comments Trump made in Wednesday’s head-to-head debate with Clinton, said the Department of Justice would consider any allegations brought to it.

But she added: “At this point I don’t think it is helpful to speculate about whether or not we would look into something we do not see as an actual threat.”

Lynch said the Justice Department was working closely with all US states to ensure their systems were secure against the risk of “hacks, attacks and the like.”

“We feel it is very difficult for any outside actor to affect the result. We have great confidence in our electoral system.”

Lynch also said that her department had been briefed by intelligence experts on Russia’s apparent attempts to influence the election through its involvement in leaks seen as damaging to Clinton’s cause.

But she said that attempts to “impact on the hearts and minds” of voters should be distinguished from claims that the actual vote tally could be influenced by foul play.