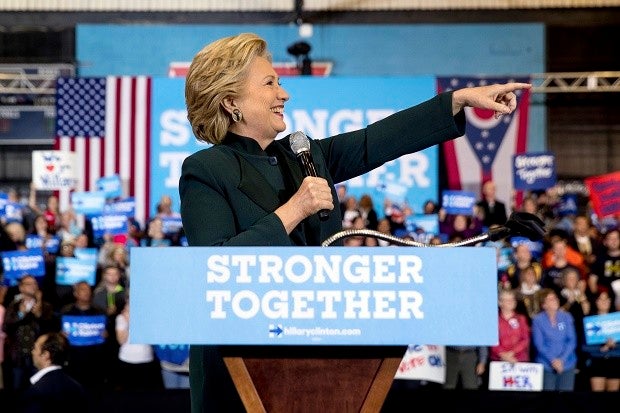 Democratic presidential candidate Hillary Clinton points to the crowd while speaking at a rally at Cuyahoga Community College in Cleveland, Friday, Oct. 21, 2016. AP

WHITE PLAINS, New York — Hillary Clinton’s campaign is increasingly preparing for the possibility that Donald Trump may never concede the presidential election should she win, a development that could enormously complicate the crucial early weeks of her preparations to take office.

Aiming to undermine any argument the Republican nominee may make about a “rigged” election, she hopes to roll up a large electoral vote margin in next month’s election. That could repudiate the New York billionaire’s message and project a governing mandate after the bitter, divisive presidential race.

Clinton’s team is also keeping a close eye on statements by national Republican leaders, predicting they could play an important role in how Trump’s accusations of electoral fraud might be perceived. That’s according to several Clinton campaign aides, who spoke on condition of anonymity because they were not authorized to publicly discuss internal strategy.

Campaign officials stress they are not taking the outcome of the election for granted. But Clinton and her team have begun thinking about how to position their candidate during the postelection period. Long one of the country’s most polarizing political figures, Clinton has begun telling audiences she’ll need their help in healing the country.

“I’ve got to figure out how we heal these divides,” she said in a Friday interview with a Tampa radio station WBTP. “We’ve got to get together. Maybe that’s a role that is meant to be for my presidency if I’m so fortunate to be there.”

A refusal by Trump to accept the election results would not only upend a basic tenet of American democracy, but also force Clinton to create a new playbook for handling the transfer of power. And a narrow victory would make it more difficult for her to claim substantial political capital at the start of her administration.

“Donald is still going to whine if he loses. But if the mandate is clear, I don’t think many people will follow him,” said Virginia Sen. Tim Kaine, Clinton’s running mate, in an interview Thursday with CNN’s “New Day.”

While Clinton’s campaign has long focused on maintaining pathways to cross the threshold of 270 electoral votes, it’s now looking to capture an expanded number of states that could also help determine control of the Senate — including Republican-leaning Arizona.

Polls indicate that Clinton has extended her advantage in several toss-up states during the three fall debates, giving her campaign more confidence. She has maintained stable leads in states such as Pennsylvania, Virginia and Colorado, as well as a narrow edge in Florida and North Carolina.

“They’re looking at it like this: We’ve got these doors of opportunity open, let’s make sure we go down all of them,'” said Jeremy Bird, the national field director for President Barack Obama’s 2012 campaign who is helping Clinton’s team.

If Clinton wins the White House, she will enter as one of the least popular first-term presidents in generations. While Trump has suffered from high unfavorable ratings, particularly among women, Clinton has been hampered by polls showing more than half of the public considers her to be untrustworthy.

Some Republicans are already preparing for Trump’s defeat, downplaying the significance of a Clinton triumph.

“On Nov 8, Clinton’s claims of a mandate will fly in the face of reality. She only won by not being Trump,” tweeted conservative writer Erick Erickson. Rolling up a big victory in the Electoral College would let Clinton push back against that notion and assert that voters had rejected what she has called Trump’s mean, divisive message.

In a race against Trump and independents Gary Johnson and Jill Stein, Clinton may struggle to reach 50 percent of the vote. But competing in states such as Arizona and pushing for Senate victories in Missouri and Indiana might help Democrats in their quest to recapture the Senate and give her a better chance of surpassing Obama’s 332 electoral votes in the 2012 campaign.

Clinton’s campaign is making a significant push in Arizona, which offers 11 electoral votes and has stayed in the Republican column in all but one presidential election since 1952. Bill Clinton was the last Democrat to carry the state, in 1996.

First lady Michelle Obama courted voters in Phoenix on Thursday, following appearances by Vermont Sen. Bernie Sanders and the Clintons’ daughter, Chelsea Clinton. The campaign is spending $2 million in advertising and toying with sending Clinton herself there before Election Day.

“I think it’s clear that Hillary Clinton has a chance to win Arizona just like her husband did 20 years ago,” said Rodd McLeod, a Phoenix-based Democratic strategist who helped Clinton’s campaign during the primary.

Georgia, which has had an influx of diverse voters in the Atlanta area, is considered a future battleground state, with many Democrats comparing it to North Carolina.

Utah overwhelmingly supported Mitt Romney, the nation’s first Mormon presidential nominee, with more than 72 percent in 2012. But many of the state’s Republicans have abandoned Trump and polls show Clinton and Trump in a tight contest against independent Evan McMullin, a conservative former CIA officer who graduated from Brigham Young University.

If McMullin captures Utah, he will be the first independent presidential candidate to win electoral votes since George Wallace in 1968.

READ: Fury at debate as Trump refuses pledge to respect a Clinton win