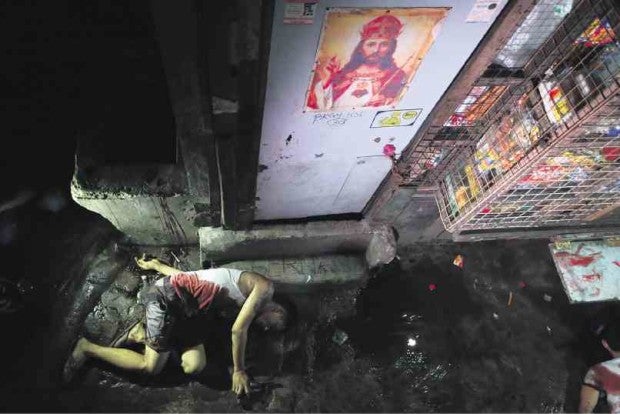 AWOL policeman Bobby Orit and his companion Danilo Guevarra lie dead in front of a store at the Aroma Compound in Vitas, Tondo, following a “shootout” with Manila policemen on Thursday. Investigators say the two men, the targets of a buy-bust, shot first after they sensed they were dealing with undercover lawmen. RAFFY LERMA

Commission on Human Rights (CHR) chairperson Jose Luis “Chito” Gascon on Wednesday said the rising casualties at the height of President Rodrigo Duterte’s war on drugs was “unprecedented” since the commission was established in 1987.

During the committee hearing on the proposed P496.136 million CHR budget for 2017 at the House of Representatives, Gascon was asked about his statement during the Senate inquiry on Tuesday that the International Criminal Court (ICC) may take custody of the spate of summary killings in the country under Duterte’s administration.

Gascon said the ICC may take cognizance of the human rights violation cases especially if the government failed to act upon the crimes against humanity, such as genocide and war crimes.

“The ICC can only intervene if the state itself unable or unwilling to address those cases… The cases of human rights violations could be within the ambit of the International Criminal Court, but only if they fall within the mandate or jurisdiction of the ICC… (which includes) genocide or war crimes, or broadly referred to as crimes against humanity,” Gascon said.

Gascon exemplified that during the administration of former President and now Pampanga lawmaker Gloria Arroyo, 100 to 200 human rights defenders, activists, and journalists were killed in a 12 to 18 month period.

But during the first 55 days of the Duterte administration, close to 1,916 people were killed during police operations and by vigilantes at the height of the administration’s war on drugs.

Gascon cited Philippine National Police (PNP) Director General Ronaldo “Bato” Dela Rosa who said during the Tuesday’s Senate hearing that 1,160 cases of “deaths under investigation” were mostly vigilante killings, or those killed by assassins and dumped on the streets of Manila with cardboard placards that read “Pusher ako, huwag tularan (I’m a drug pusher, don’t follow my example).”

Dela Rosa had said the 1,160 deaths were not all drug-related; some involved shooting, stabbing, hacking and strangulation cases.

Gascon said on top of the 756 people killed for resisting arrests during police operations, the number of casualties since Duterte waged his war on drugs reached 1,916 people killed.

“We do have to stress that we have not experienced this scale or magnitude of cases since the Commission of Human Rights was established in 1987,” Gascon told the lawmakers of the appropriations committee.

Gascon said perhaps the scale or magnitude of the summary killings may be eclipsed by the human rights violations and atrocities during the martial law regime of the late dictator Ferdinand Marcos.

“If we go by the report of Director General De La Rosa yesterday, he said we have recorded 1,160 recorded ‘deaths under investigation’, meaning possibly drug-related, but perpetrators are not identified, (which means these are) possibly vigilante killings. Plus another 700 plus persons killed under police operations,” Gascon said.

“So together, they’re close to 1,900 in the last 55 days since July 1. The magnitude or scale is unprecedented,” he added.

Gascon said the CHR was able to respond to only 20 percent of its active human rights cases.

“We confess that we as CHR are unable to respond to every single case at this time… What we are doing is documenting, trying to dig deeper, to go further. We are asking the investigators to look into the profiles of the victims and to see if what is being said na may mga karatula, na nakalagay na ‘Huwag tularan, drug pusher,’ etc.,” Gascon said.

“Our objective is essentially documentation and calling, of course, on authorities to fully investigate these,” Gascon said.

Gascon said the spate of summary killings by vigilantes with cardboard posters calling them pushers should be treated as crimes which law enforcement agencies should fully investigate to bring the perpetrators to jail.

“A significant part (of the killings) are those na nilalagyan ng karatula, called ‘vigilante justice.’ Ang aming panawagan is they should all be treated as crimes and therefore, full force of the law of the bureaucracy in charge of law enforcement should be directed at investigating all these cases, and ultimately uncovering the perpetuators and bringing them to justice,” Gascon said.

Gascon said the commission is grateful for the increase in the proposed budget for the CHR according to the National Expenditure Program — P496.136 million for 2017, up 7.28 percent from the 2016 budget of P460.026 million.

Gascon urged the administration to look into a more rehabilitative and restorative approach to drug criminality and not only focus on law enforcement operations.

Gascon proposed a more human approach of decongesting jails by moving drug convicts to rehabilitation centers to free up the space in the country’s penitentiaries.

Gascon cited the experience of other countries where jails are closing down due to its strong drug rehabilitation program and lenient sentences for drug offenses.

“The solution is more restorative, or rehabilitative, regarding those involved in crimes or possession or use of drugs. Move them away from jails to rehabilitation centers instead. This might create room in our jails in the short immediate term,” Gascon said.

“We need to take a look from a health and reduction or damage or risks perspective, rather than law-enforcement perspective. Something Senator Risa (Hontiveros) referred to as moving from killing to healing,” he added. JE