CHR: ICC may exercise jurisdiction over PH drug killings if … 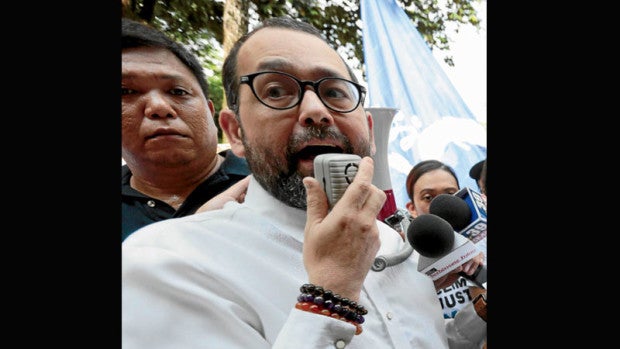 The International Criminal Court (ICC) may exercise its jurisdiction over the spate of drug-related killings in the country if the Philippine government fails to prosecute alleged vigilante perpetrators, according to the Commission on Human Rights (CHR).

During the Senate hearing on the administration’s war against drugs on Tuesday, CHR Chair Jose Luis “Chito” Gascon said the government should be able to show that it was doing everything in its capacity to prevent extrajudicial killings from being the new norm.

“Extrajudicial killing is any killing by government forces as well as killing by any other group which the government failed to investigate, prosecute or punish when it is in a position to do so,” Gascon said.

“Failure of the government to address this situation currently prevailing of unexplained extrajudicial killings could result in the possibility of ICC exercising jurisdiction over these matters,” he told Sen. Leila de Lima, chair of the Senate committee on justice and human rights.

Gascon noted that the Philippines, an “active participant” in the ICC, was a party to the Rome Statute from 2011 when the government ratified the treaty that established the international tribunal.

But before the ICC steps in, it should be established that the state is “unable and unwilling” to prosecute the cases, according to Gascon.

“Meron pong kapasidad ang ICC to exercise its jurisdiction … In fact, the United Nations has mechanisms of monitoring, and the ICC as well,” he said.

Gascon said crimes against humanity should be able to establish “widespread” and “systematic” attacks against the civilian population.

He said the “widespread” element was not dependent on the number of victims but on the totality of the condition without prosecution and accountability, while “systematic” constituted a policy-oriented approach.

De Lima, however, admitted that it would be difficult to establish that the state had a hand on systematic killings.

As of Aug. 22, the Inquirer’s “Kill List” notes 729 drug-related deaths since June 30 or after President Duterte took office.