Bato: They only have themselves to blame
By: Tarra Quismundo - Reporter / @TarraINQ
Philippine Daily Inquirer / 12:20 AM August 24, 2016

“IF THEY did not resist, they would still be alive.”

That’s how Philippine National Police Director General Ronald “Bato” dela Rosa explained on Tuesday why 756 “drug personalities” had been killed since the war on illegal drugs was launched when President Duterte took office, fulfilling a campaign promise that catapulted him to the presidency.

Sen. Leila de Lima, chair of the committee on justice and human rights, said: “Yes, there are cases when suspects resisted, or attempted to fight off arrest. But you’re telling us, you’re putting on record that in 756 deaths, the circumstances were such that they resisted?”

“Unless controverted by evidence, I presume my men are performing regularly,” he told De Lima on the second day of the Senate hearing she called to expose police “scalawags” involved in alleged extrajudicial killings that had accompanied Mr. Duterte’s drive to stamp out the narcotics trade in three to six months of his presidency.

Dela Rosa said each incident was being investigated by the PNP Internal Affairs Service (IAS).

Two women, wearing smoke glasses and shawls wrapped around their heads were called by De Lima on Monday to testify against policemen allegedly out to kill their drug pushers and dealers to cover their tracks in Mr. Duterte’s unprecedented crackdown on illegal narcotics.

Officials said there were at least 1.3 million Filipino drug users. 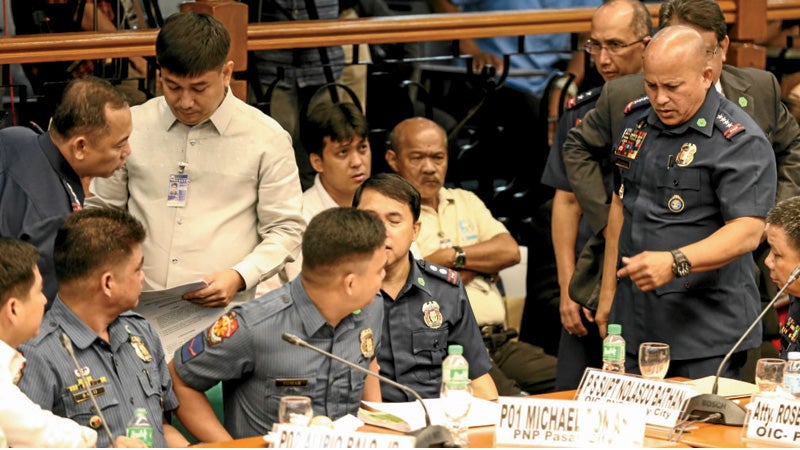 About 26 percent of the nation’s 42,000 barangays, mostly in urban centers, had been classified as “drug-affected.”

One woman said her partner and his father were tortured and killed under police custody. Another said policemen brought “shabu” (methamphetamine hydrocloride) to their Antipolo home for repacking and selling by her parents who disappeared after telling her they were going to hand over sales proceeds of P50,000 to the lawmen.

Dela Rosa said 301 police officers were on a watch list on suspicion of selling drugs confiscated in raids or protecting syndicates involved in the manufacture and distribution of narcotics.

He said 20 of them had been arrested, 11 killed in police operations, seven charged with criminal offenses and six slapped with administrative cases.

In an updated report, Dela Rosa said 1,160 other deaths had been recorded since July 1 other than those killed in police operations, putting the overall toll of lives at 1,916. He said these were not all drug-related. The others were shooting, stabbing, hacking and strangulation cases still under investigation.

“This has a chilling effect,” Sen. Franklin Drilon said. “We are all concerned about the number of deaths, by any language this is alarming.”

Sen. Panfilo Lacson, a former PNP chief, noted that as Dela Rosa had revealed, nine police officers had been killed and 18 wounded in antidrug operations from July 1 to Aug. 18.  The military had also lost three men in action, while eight others were wounded.

“The fact that there were nine dead, it means there really was resistance. But it doesn’t follow that if no police officer was injured or killed in an operation where a suspect had died, there was really no resistance,” Lacson said.

Responding to Sen. Francis Escudero’s question, Dela Rosa said the PNP was not in the business of summary executions. “We are not butchers,” he said.

The PNP chief dismissed as “rhetoric” Mr. Duterte’s threats that he would kill those involved in illegal drugs. “Perhaps the President just said that to scare drug personalities, so that they would surrender,” Dela Rosa said.

He said intensified operations against drug pushers and peddlers had driven down the crime rate.

“As we review the index crime volume of July this year, we see that there is a decrease of 31 percent from last year which is also an indication of the success of our antidrug campaign,” Dela Rosa said.

The figure represents a drop in cases such as robberies, rape, physical injuries, theft cases and car theft incidents.

Zeroing in on the first month of the Duterte administration, he said the difference in crime figures was even more stark: a 49 percent decrease comparing the second half of 2015 and the first few weeks of the new government, covering July 1 to Aug. 7.

These include surrenders and arrests in the country’s drug hotbeds, including Metro Manila, where 94 percent of the 1,709 barangays are affected by drugs.