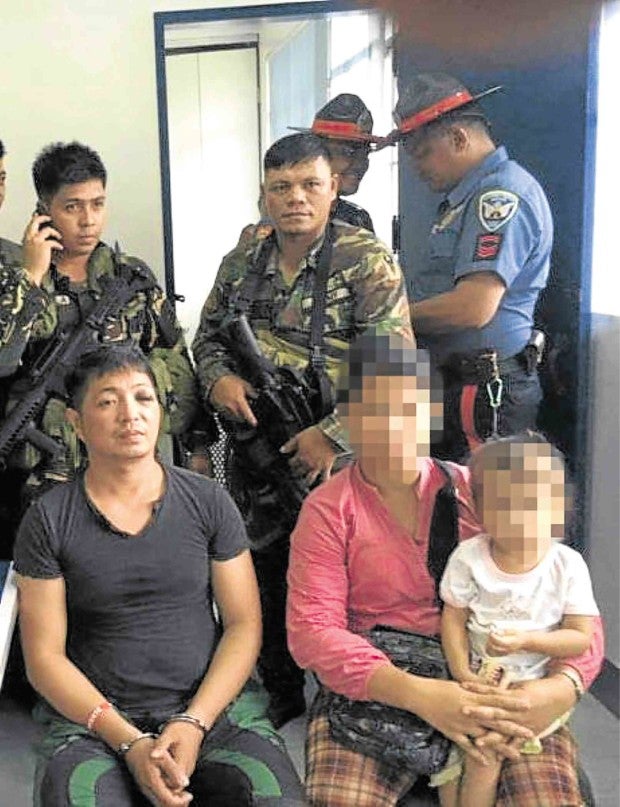 LEGAZPI CITY, Philippines—The Army reservist who shot and killed a biker in Quiapo, Manila, early this week over a traffic dispute turned up in his wife’s home province of Masbate, where he surrendered to police on Friday.

De Vera said Tanto, the subject of a nationwide police manhunt, chose to seek refuge in the coastal village of Bangad because his wife traced her roots there. The village is 18 kilometers from the town center.

Army Maj. Virgilio Perez, 9th Infantry Division spokesperson, said Tanto’s wife, Aniza, sought the help of one of her husband’s friends in the military to facilitate his surrender.

Tanto, who is on inactive status in the military’s reserve force, was caught on closed-circuit television  (CCTV) camera  shooting biker Mark Vincent Garalde several times on Monday night after a fistfight on Casal Street in Manila over a traffic dispute.

A stray bullet from Tanto’s gun also hit 18-year-old student Rosell Bondoc, who remains at the Mary Chiles Hospital.  The second year student of the Universidad de Manila was hit in the lower back, with the bullet damaging her kidney.

De Vera said the team of soldiers and police who took in Tanto in Masbate failed to recover any firearm. The suspect later told police that he  left his guns with his brother-in-law in Nueva Vizcaya.

The former soldier was taken to the Masbate police headquarters for temporary custody on Friday afternoon.  Murder and frustrated murder charges will be filed against him when he arrives in Manila.

“We will give him a villain’s welcome,” Dela Rosa said in a press briefing on Friday evening at Camp Crame. He said he would welcome the suspect with “a deadly curse and a fatal glare. ”

While the welcome will be “noncontact,”  the PNP chief joked that he would teach Tanto “boxing.”

“He’s bad at fistfighting, that’s why he pulled a gun,” Dela Rosa said.

Tanto was in Masbate where members of the 9th Infantry Division headed by Col. Ferdinand Hidalgo made the arrest on Friday.

Coronel gave assurance of Tanto’s safety on his way to Manila. “You have my personal guarantee,” he  said.

But those who helped Tanto evade the law will be charged with “harboring and concealing a fugitive and for providing assistance,”  Coronel said, adding that Tanto’s relatives appear to be cooperating with authorities so far.

Meanwhile, Garalde’s mother on Friday thanked authorities for the arrest of the road rage suspect, but said she was not yet ready to face the man who killed her son.

“I’d have to get out [of the room]. I might kill [him]. I can’t bear to see him,” Marilou Garalde said hours after Tanto’s arrest.

The suspect’s safety on his way to Manila was of no interest to her, she said. “Regardless of whether  he arrives on his feet or [on his back] … it’s up to him, as long as I don’t get to see him,” she said. “The pain I’m feeling right now [might be] equivalent to what I’m going to do to him,  that’s why I leave it all to prayer— that this case would move forward and won’t end in vain.”

Garalde, who signed the murder complaint against Tanto on Friday at St. Peter’s Chapel in Quezon City, where her son lies in state, also appealed to Tanto’s companion to come forward and shed more light on the incident.

Case investigator SPO2 Charles Duran on Thursday said the suspect had a female passenger, “not his wife,” who stayed inside the car and yelled at him when he was about to shoot Garalde.

Family lawyer Persida Acosta, the chief of the Public Attorneys Office, said murder charges were filed against the suspect because there was “abuse of superior strength,” when a “vengeful” Tanto gunned down the victim after a  fistfight.

Meanwhile, Manila Vice Mayor Honey Lacuna, who paid her last respects to the victim yesterday, said the city would work on purchasing high-definition cameras to help solve crimes.  Currently, she said, each of the city’s 896 barangays has at least 16 cameras installed on the streets.

Garalde will be laid to rest at the Loyola Memorial Park in Marikina on Tuesday.

In Caloocan City on Friday, Mayor Oscar Malapitan offered a P100,000 bounty for Tanto’s arrest after learning that the road rage victim was a resident of Barangay 130, Caloocan. The reward was announced only hours before Tanto’s arrest.

On Thursday, Manila Mayor Joseph Estrada  offered a similar P100,000 incentive for any information that would lead the suspect’s arrest.

Meanwhile, members of the Scene of the Crime Operatives of the Manila Police District conducted a ‘’reenactment” of the June 25 incident, whose CCTV video had since gone viral.

MPD homicide section chief, Senior Insp. Rommel Anicete, said the police had found blood specimen inside Tanto’s car near the window on the driver’s side, which could give investigators additional information about what happened.

The police official also stood by his earlier pronouncement that Tanto was alone in the car based on an eyewitness account. With reports from Jaymee Gamil, Tetch Torres-Tupas, Inquirer.net, and Mar S. Arguelles and Michael B. Jaucian, Inquirer Southern Luzon/TVJ

Before the shots, watchers cheered fight