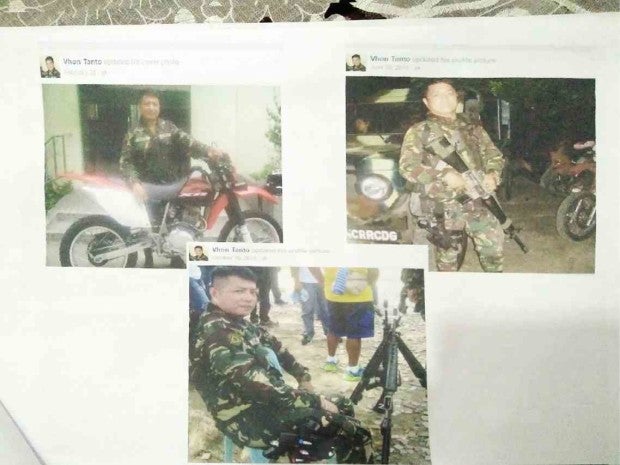 A BATTLE TO TEST HIM Vhon Tanto, shown here in his Philippine Army gear, has reportedly left his Quiapo residence since the fatal road-rage shooting Monday night. PHOTO FROM MPD HOMICIDE DIVISION

The neighbors of shooting suspect Vhon Martin Tanto had different impressions of the suspect who fled after he killed biker Mark Vincent Garalde in Quiapo, Manila, on Monday night.

Chair Armand Aquino of Barangay 385, which oversees P. Casal Street and Fraternal Street, where Tanto lived with his family, described the 39-year-old Army reservist as “quiet and aloof.”

According to him, Tanto has not been seen in the area since Monday night although his wife opened their retail store the day after the incident.

“I don’t know where media got reports that [Tanto] was a troublemaker. He was never called to the barangay hall for [anything] and he never caused any trouble as far as I know,” Aquino said.

Residents who refused to be identified, however, painted a different picture of the suspect.  They described Tanto as a “bully,” saying a lot of people were “scared of him.”

As a member of the Army reserve, the suspect was under his unit, Orbase told the Inquirer. Tanto was assigned to Caloocan City and tasked with civic duties like helping residents stranded in flooded areas, he added.

Although Tanto finished his basic citizen military training in 2014, he was “no longer an active reservist” based on the Army’s records. His “last attendance at his mobilization center was on Jan. 25, 2015,” a document from the Philippine Army said.

A check with the PNP Firearms and Explosive Office showed that Tanto owned three firearms—two .45-cal.  and a .40-cal.

Manila Police District director Senior Supt. Joel Coronel said that the suspect did not have any derogatory record and passed the neuro-exam and drug test required of gun owners.