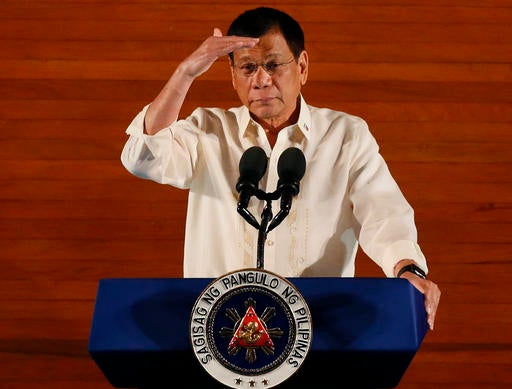 DAVAO CITY, Philippines—President Rodrigo Duterte on Friday said he wanted the party-list system stricken out of the Constitution.

“It will never come again,” Mr. Duterte said, speaking about amending the 1987 Constitution after visiting militiament wounded in an ambush by communist rebels in Kapalong, Davao del Norte province, on Wednesday.

“With a new Constitution, I will insist: no party-list,” he said.

Mr. Duterte said party-lists “abused” the system, with the rich organizing groups of their own.

“Representing what, security guards?” he said. “That’s a mockery of the law.”

The President said he would make sure changes to the Constitution would be responsive to the will of the people.

“I will not allow a Constitution that is anti-Filipino,” Mr. Duterte said.

Mr. Duterte said his administration decided to amend the Constitution through a constituent assembly (Con-ass) because a constitutional convention (Con-con) would be costly.

The President sought to ease public fears that lawmakers serving in the constituent assembly would serve their own interests.

“I will be there,” he said. “When worse comes to worst, they (the lawmakers) know what will happen,” Mr. Duterte said.

He said a Con-ass could only come up with a Constitution that is responsive to the will of the people.

“And I will be there to read what you have worked on,” he said. TVJ