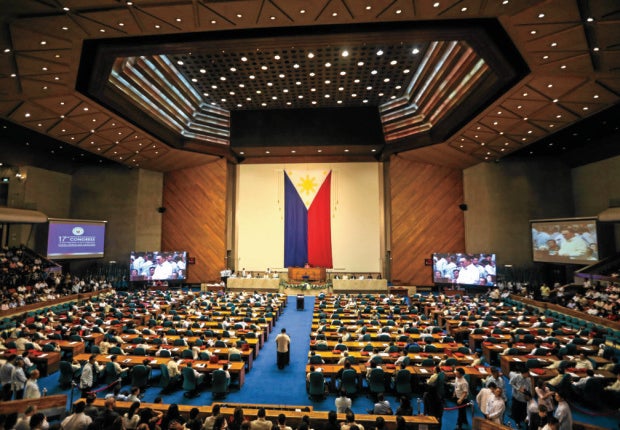 Now it is clear: the ruling Partido Demokratiko Pilipino-Lakas ng Bayan (PDP-Laban) went out of its way to control the minority bloc in the House of Representatives to railroad its plan to amend the 1987 Constitution through a constituent assembly (Con-ass).

“Only one day after the selection of the majority’s ‘minority leader,’ the leadership of the majority coalition opted to convert Congress into a constituent assembly to propose amendments to the Constitution, like the shift from unitary-presidential to federal-parliamentary, instead of the original plan to call a constitutional convention (Con-con),” Albay Rep. Edcel Lagman said on Friday.

“Congress, acting as a constituent assembly, is a convenient launching pad for federalism, more than the projected constitutional convention, which may not be easy to control,” Lagman said, dismissing Speaker Pantaleon Alvarez’s claim that he preferred Con-ass to save the P7-billion cost of a Con-con.

“The order of the day is inordinate fast-tracking with the hegemony of supermajorities assured,” Lagman said.

Quezon Rep. Danilo Suarez of the United Nationalist Alliance was elected on Wednesday as minority leader amid accusation from Liberal Party (LP) members in the minority that PDP-Laban’s allies in the party-list coalition allowed themselves to be used to win the vote for Suarez and beat Ifugao Rep. Teddy Baguilat of the LP.

Baguilat had the second highest vote in Monday’s speakership race. By tradition, he should have been automatically elected as minority leader.

Suarez supports Alvarez’s proposal to amend the Constitution through a constituent assembly.

Alvarez has denied any hand in the election of Suarez.

With PDP-Laban having a supermajority in both the House and the Senate, Lagman said he was not surprised why the new ruling party agreed to a Con-ass rather than a Con-con, which would entail electing delegates to a convention that would propose amendments to the Constitution.

Even allies of President Duterte themselves were not too keen on amendments through Con-ass.

“Con-ass will not be acceptable to the people as they perceive Congress to be dominated by political dynasties and fear that vested and self-serving interests would inevitably influence proposed changes to the Constitution. This is evident in the public outcry against Con-ass, particularly on social media, which has been fast and furious,” Zarate said.

With the rich and powerful controlling Congress, Zarate expected the Con-ass to “do away with its protectionist economic provisions, remove the antidynasty clause and lift term limits of elected officials.”

Akbayan party-list group also opposes Con-ass because of the lack of check and balance.

“A constitutional assembly under a supermajority in both chambers of Congress is like having zombies to rewrite our Constitution,” Akbayan Rep. Tom Villarin said.

“We want a democratic, deliberative, and inclusive process, not one that stifles opposition and dissent, which is what our Congress has now turned into,” he added.

Villarin said costs should not be an issue when it came to ensuring genuine representation in matters of national importance, such as amending the Constitution.

Ilocos Norte Rep. Rodolfo Fariñas, the majority leader, said the goal was the establishment of a purely parliamentary system with a prime minister as head of state.

Fariñas said Congress would follow President Duterte’s suggestion to adopt the French form of parliamentary government because Filipinos preferred to elect their Presidents.

But this will only be transitional, as the main goal is to have a purely parliamentary system where representatives from each state elect a prime minister to lead the country, Fariñas said.

He said the modified parliamentary form of government was adopted from 1973 Constitution, and put into effect and tried through the short-lived Batasang Pambansa in 1984.

Senate President Aquilino “Koko” Pimentel III said he believed his colleagues would keep an open mind and eventually support President Duterte’s preferred way of amending the Constitution, especially since they would play the starring role in a constituent assembly.

Pimentel, an advocate of federalism who earlier pushed for a constitutional convention, said in a phone interview that he could see the benefits of a constituent assembly and would now support the idea.

In a constituent assembly, members of Congress could limit the topics to be discussed, could hire experts to help them come up with proposed changes to the Constitution, and could do the job without receiving additional salaries, he said.

“Since we would set the limit for ourselves, we are expected to follow our own Con-ass resolution,” he added.

This could help deal with concerns that lawmakers may use the assembly to push for reforms that would benefit only them or lengthen their stay in power.

The public could also keep a close watch on proposed changes, and complain if they dislike what’s happening, since the process would be open and transparent, Pimentel said.

As for questions on expertise of members of Congress who have no background in law to study and propose changes to the Constitution, Pimentel said legislators could always hire experts to help them.

Even in a constitutional convention, there is no guarantee that the delegates to be elected would be experts, he said.

Malacañang also sought to ease concerns that a Con-ass would be self-serving.

“Whatever results will be from the Con-con or Con-ass, it will be to the benefit of the next generation of leaders, right? It will not be affecting them directly. So being self-serving does not really come into play here,” presidential spokesperson Ernesto Abella told in a press briefing.

But Sen. Leila de Lima said it was not the question of a constituent assembly or a constitutional convention that she expected to be the bone of contention, but the idea of shifting to a federal form government.

“There will be those for or against either mode of constitutional amendment, but I don’t think the issue alone will divide elected officials or the public. What is potentially divisive is the issue of federalism itself,” De Lima said in a text message.

Sen. Grace Poe is open to discussions of federalism and may be inclined to support it through a constituent assembly given certain conditions.

First, Poe said Congress must pass a freedom of information law that would cover the entire government, including local governments, under a federal government. Congress must also pass an antipolitical dynasty law to ensure a level playing field for everyone.

Second, the conversion of regions into federal states must be done in phases so that those that could stand on their own economically would be the priority, she said.

Poor regions should continue to receive support from the national government until they could stand on their own, she added.

Sen. Risa Hontiveros said a constituent assembly went “against the interest of democracy and active citizenship, especially with a House where the heavy hand of the Executive was so plain to see.”

Senate Minority Leader Ralph Recto said a constituent assembly was more practical or pragmatic, but the question was whether the two houses of Congress would vote jointly or separately, since the Constitution requires a three-fourths vote of all members of Congress to revise or amend the Charter.

Recto said he was not in favor of a shift to the parliamentary form of government. TVJ

Palace: No self-serving intentions in pushing for Con-Ass