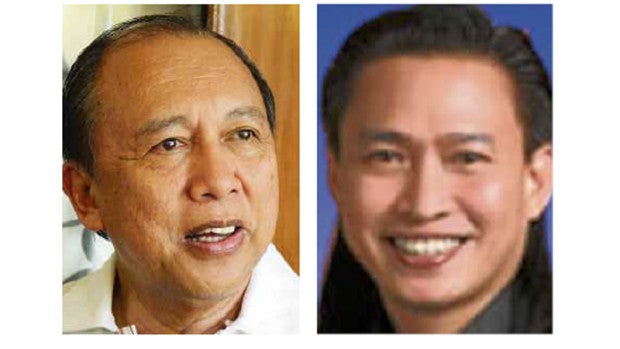 There are two congressmen in the 17th Congress claiming to be the winner in the game of losers.

On one side is Quezon Rep. Danilo Suarez, a member of the United Nationalist Alliance, who was elected minority leader in a meeting of minority members Wednesday morning.

On the other is Ifugao Rep. Teddy Baguilat, a member of the erstwhile ruling Liberal Party, who slammed the Suarez-led minority bloc as a sham, “fake” minority and dubbed himself as the “authentic” minority leader.

The mess in the minority race stemmed from the elections for Speaker when the second place behind the winning Speaker Pantaleon Alvarez went to Baguilat with eight votes, followed by Suarez with seven.

But Majority Floor Leader Ilocos Norte Rep. Rodolfo Farinas, a new member of President Rodrigo Duterte’s Partido Demokratikong Pilipino-Lakas ng Bayan (PDP-Laban), insisted that according to the rules, the minority leader would be elected by members of the minority bloc or those lawmakers who did not vote for and abstained from voting for the winning Speaker.

With numbers on his side, Suarez handily won the minority elections among the 39 members who both abstained and did not vote for the winning Speaker.

In a press conference after the elections, Baguilat called the move “garapalan” (shameless) for the majority-led coalition to control what could have been an opposition bloc in the House of Representatives.

The Liberal Party stalwart who did not join the LP contingent that joined the majority coalition said he would continue his plan to become a “fiscalizer” in Congress.

It was Baguilat who filed a resolution seeking a congressional probe on the spate of summary killings of suspected criminals at the height of Duterte’s war on drugs.

“In summary, garapalan itong nangyayari (this is a shameless move). Balik tayo sa dating plano na itutuloy natin ang ating tungkulin na maging fiscalizer (I will go back to my previous plan to continue my role as a fiscalizer),” Baguilat said.

“We are the real and genuine minority and we will be the conscience of this Congress,” he added.

In the press briefing, Baguilat’s ally Albay Rep. Edcel Lagman said Alvarez’s majority bloc not only established a “super majority” by entering into coalition agreements with several political parties; the administration coalition was also able to control the minority bloc by “lending” some of its members to the minority to install Suarez as minority leader.

Lagman said Suarez is clearly an ally of Duterte, and was even a co-author in some of Alvarez’s pieces of legislations consistent with Duterte’s legislative agenda, such as the restoration of death penalty and the grant of Duterte’s emergency powers to resolve the traffic congestion.

Suarez’s minority leadership would ensure that the minority bloc would be cooperative instead of being the opposition in the chamber dominated by administration allies.

Lagman maintained that the 20 lawmakers who abstained cannot be members of the minority but should be the independent bloc of Congress.

And yet these lawmakers joined the elections on Wednesday that propelled Suarez, an ally of former Vice President Jejomar Binay, to the minority post.

Northern Samar Rep. Raul Daza also minced no words in hitting the minority bloc, which he said might as well be a part of the coalition of traditional politicians in Congress.

“Super ang majority dahil pati ang minority, nilikha nila na maging bahagi ng kanilang super majority (The majority is super because they also control the minority, which they created to be a part of their super majority). They have created the majority and now it’s clear that they are creating a minority within the super majority,” said Daza, a Liberal stalwart.

Daza said according to the rules, the majority members would comprise those who voted for the winning Speaker.

He said Suarez voted for Alvarez, making him a member of the majority, thus ineligible to run for minority leader.

“Common sense says that when you are voted for as a disqualified candidate, the votes for you are invalid. Stray votes, hindi binibilang (which are not counted),” Daza said.

In his speech after his election, Suarez vowed to lead a cooperative and constructive minority bloc and maintained that his election as minority leader was legitimate and a result of the numbers game in Congress.

He said he only voted for Alvarez due to the “time tested tradition” to vote for another candidate and not one’s self. Besides, he also made a manifestation that he would join the minority despite voting for the winning Speaker.

On the other hand, Navotas Rep. Tobias “Toby” Tiangco did not vote for any candidate in the Speaker race, making him an independent member of the House.

Erice reiterated his move to take the minority mess to the Supreme Court.

Alejano said he stood by his principle to be a member of an opposition minority bloc in Congress.

“Masaya ako (I’m happy) that I can stand up on my principles. We will continue to call ourselves the authentic and real minority,” Alejano said.

Villarin lamented the majority bloc’s move to “railroad” the elections for minority leader.