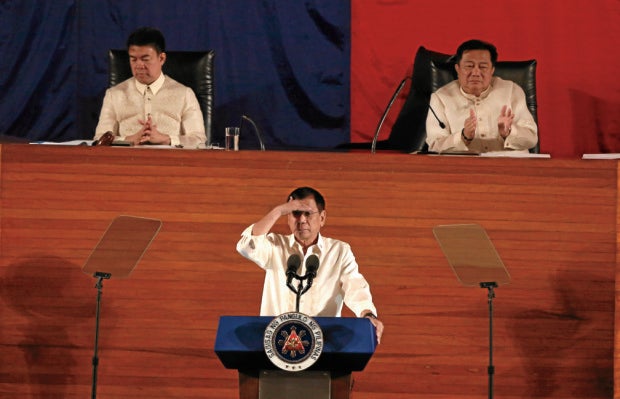 President Rodrigo Duterte delivered his first state of the nation address (Sona) on Monday with sights set on the future of the nation he promised to lead on a platform of eradicating criminality, illegal drugs and corruption in government.

In his almost two hour-speech, Duterte laid down his plans for the next six years as he vowed to uphold a clean leadership.

“I assure you, this will be a clean government,” the President said, adding that he would not waste his time pointing fingers at his predecessors.

“We cannot move forward if we allow the past to pull us back. Finger pointing is not the way that is why I will not waste my precious time dwelling on the sins of the past,” he said in his opening message as he addressed both Houses of Congress at the Batasang Pambansa in Quezon City.

But Duterte vowed to punish crooked government officials and those who make the life of Filipinos hard.

READ: Duterte: I am not vindictive, but crooked execs will be punished

“Those who betrayed the people’s trust shall not go unpunished. They will have their day in court,” he said.

The chief executive, wearing a barong Tagalog, arrived at the House of Representatives onboard a presidential chopper at 3:25 p.m.

No stopping vs drugs

True to his campaign promise, Duterte said would be no let-up in the government’s fight against illegal drugs.

“There will not be a let-up in this campaign against illegal drugs. We will not stop until the last drug lord, the last financier, or the last pusher is put behind bars or below the ground if they so wish,” he said.

Since his assumption in office last June 30, close to 100 thousand drug lords, users and pushers have surrendered to the government.

However, more than 300 individuals have also been killed amid the government’s anti-drug campaign.

Amid the rise in killings of suspected drug peddlers, Duterte said he respects the separation of Church and State amid concerns from the Catholic Church about his bloody anti-drug campaign.

Duterte said the Reproductive Health (RH) Law must be implemented to curb the population growth and assist the poor in family planning.

“The implementation of the Reproductive Health Law must be put in full force and effect so that couples especially the poor will have freedom of informed choice on the number and spacing of children,” he said.

This was despite the opposition of the Catholic Church and other pro-life groups.

The President said the RH law, which was stalled by the Supreme Court, must be implemented to help the poor to plan their families to ensure that the marginalized would become productive sectors of society, he said.

Duterte made a historic announcement as he declared a unilateral ceasefire with the communist rebels effective immediately.

“I am now announcing a unilateral ceasefire with the CPP-NPA effective immediately,” he said, adding that the communist rebels would respond accordingly.

“Let me make this appeal to you, if we cannot as yet love one another, then in God’s name, let’s not hate each other too much,” he added.

The President lamented that it was both “ironic” and tragic” that while the government and the rebels expressed willingness and readiness to return to the negotiating table, both forces continue to fight each other.

“We cannot talk peace while we load our guns with bullets,” he said.

The Philippine government and the Communist Party of the Philippines-New people’s Army would start the formal peace talks on August 20.

The President said addressing climate change was one of his administration’s top priority but this should not hinder economic progress.

READ: Climate change priority but must not hinder growth—Duterte

“Addressing climate change shall be a top priority but upon a fair and equitable equation. It should not stymie our industrialization,” he said.

Duterte has earlier stated that he will not honor the historic Paris Agreement, saying that it is “stupid.”

“We have not reached the age of industrialization. We’re now going into it. But you are trying to stymie [our growth] with an agreement that says you can only go up to here. That’s stupid. I will not honor that,” Duterte had said.

The Philippines has pledged to reduce carbon emissions by 70 percent in 2030 when it signed the agreement last April.

The President vowed to lower individual and corporate tax rates as well as to “relax” the bank secrecy law during his term.

“We will lower personal and corporate income tax and relax the bank secrecy law,” he said.

Economic and finance officers of Duterte earlier said that the government would definitely review the tax system, initially to update the income tax brackets and eventually to lower corporate and individual tax rates.

“The worsening traffic situation should be legitimately addressed if Congress could accord emergency powers to me. Kung gusto niyo nang madalian, isagad na. Nasa inyo ‘yan (If you want it fixed immediately, give it to me. It’s up to you),” he said.

To aid in easing up traffic congestion, he said that there would be no let-up in its campaign against out-of-line (colorum) transport services and that he would revive the Pasig River Ferry system.

The President urged Congress to put up a federal form of government with a prime minister and a president.

“My advice to you is mainly a federal system parliamentary but be sure to have a president. Hindi na ako iyan (Not me). I’m disqualified. And by that time, I would no longer be here,” he said.

“If you hurry up the federal system of government, you can submit to the Filipino people [in the] fourth, fifth year… You call for a referendum. And after that, call for a presidential election, sibat na ako (I’ll be leaving). But you must have a president,” he added.

Duterte also urged Congress to pass the proposed Bangsamoro Basic Law (BBL) and insert a provision of federalism in the proposed legislation.

“Nandiyan na yan eh (It’s there). I ask you to pass it minus the constitutional issues that are contentious. Ibigay na natin (Let us pass it) and when the federal system comes, isama mo na sa (include it in) package. That’s the solution for Mindanao,” said Duterte, the first chief executive from Mindanao.

The President said only federalism would put an end to the Muslim conflict in Mindanao.

Despite his love-hate relationship with the media, Duterte said his administration would not tolerate violation against and repression of media, saying “bona fide” media is his partner for change.

The President said he was not condoning the killing of “bona fide” journalists.

“This government does not condone violation and repression of media,” Duterte said in his Sona.

“The bona fide media has always been our partners for change,” he added.

The President appeared to be extending a hand of reconciliation to media when he announced that he had formed a superbody to investigate the extrajudicial killings of journalists. IDL