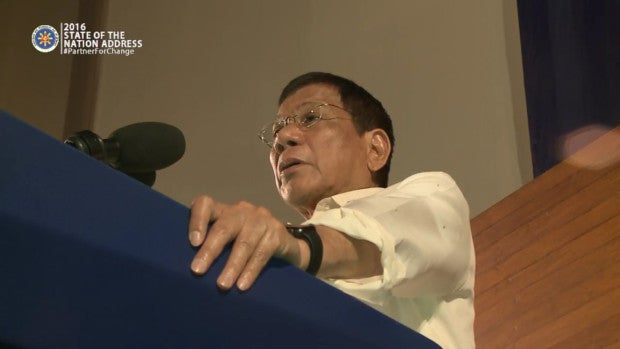 President Rodrigo Duterte on Monday urged Congress to put up a federal form of government with a prime minister and a president.

During his first State of the Nation Address (Sona) at the House of Representatives, Duterte said what he wanted was a federal form of government patterned after that of France.

He said the system should be parliamentary but there should still be a president.

Duterte said he would be willing to vacate his post if the federal system of government would require another election for president.

READ: Duterte: Change in form of gov’t possible only through ‘Con-Con’

“My advice to you is mainly a federal system parliamentary but be sure to have a president. Hindi na ako niyan (Not me). I’m disqualified. And by that time, I would no longer be here,” he said.

He said he hopes a federal system of government is put in place four to five years into his term and if he needs to vacate his post to give way to another president, he would gladly do so.

“If you hurry up the federal system of government, you can submit to the Filipino people [in the] fourth, fifth year… You call for a referendum. And after that, call for a presidential elections, sibat na ako (I’ll be leaving). But you must have a president,” Duterte said. JE/rga