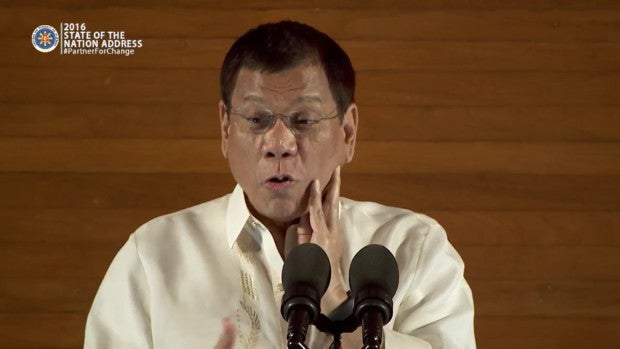 President Rodrigo Duterte on Monday urged Congress to pass the proposed Bangsamoro Basic Law (BBL) and insert a provision of federalism in the proposed legislation. SCREENGRAB FROM RTVM

President Rodrigo Duterte on Monday urged Congress to pass the proposed Bangsamoro Basic Law (BBL) and insert a provision of federalism in the proposed legislation.

During his first State of the Nation Address (Sona) at the House of Representatives, Duterte said the 17th Congress should pass the bill and remove its unconstitutional provisions.

“Nandiyan na yan eh (It’s here). I ask you to pass it minus the constitutional issues that are contentious. Ibigay na natin (Let us pass it) and when the federal system comes, isama mo na sa (include it in) package. That’s the solution for Mindanao,” he added.

He said only federalism would put an end to the Muslim conflict in Mindanao.