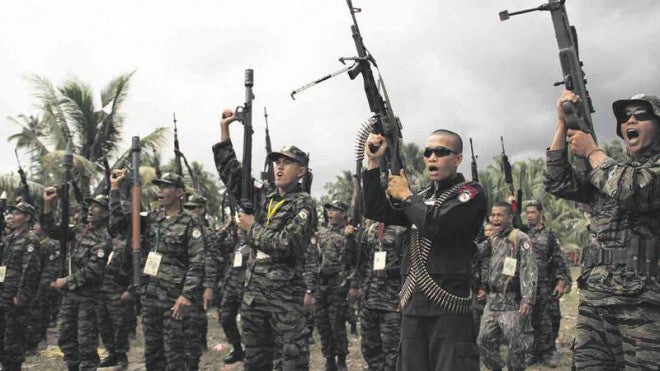 CAMP SIONGCO, Maguindanao—There is enough land in the Philippines for everyone, including the Bangsamoro people, President Duterte declared on Friday.

“I’d like to publicly salute Murad for opting, for choosing to talk further,” Mr. Duterte said as he addressed government troops at the 6th Infantry Division headquarters in Camp Siongco, Maguindanao.

One such issue is the proposed regional armed forces and regional police, which breaks the chain of command and cannot be allowed, the President said.

But Mr. Duterte said he was willing to grant the unquestioned provisions of the BBL, and the same goes for Nur Misuari’s faction of the Moro National Liberation Front (MNLF), which signed a peace agreement with the government in 1996.

“Even if you give them that part of the territory (the proposed Bangsamoro region), there’s enough land in the Philippines. The Philippines is vast. As long as there is no fighting, everybody can be accommodated, and we can establish industrial zones,” the President said.

If there is no fighting, new investments will come into the Philippines, creating jobs, he said.

Mr. Duterte said the desire for industrial zones was the reason why he had misgivings about the Paris Agreement on climate change, which would limit carbon emissions.

Philippine industries are still developing, but the other signatories to the agreement are industrialized countries, he said.

Earlier, Presidential Adviser on the Peace Process Jesus Dureza said the Bangsamoro Transition Commission would be reconstituted for the drafting of a new enabling law for the proposed Bangsamoro region. TVJ