Robredo lawyer: Marcos camp has no proof of poll fraud 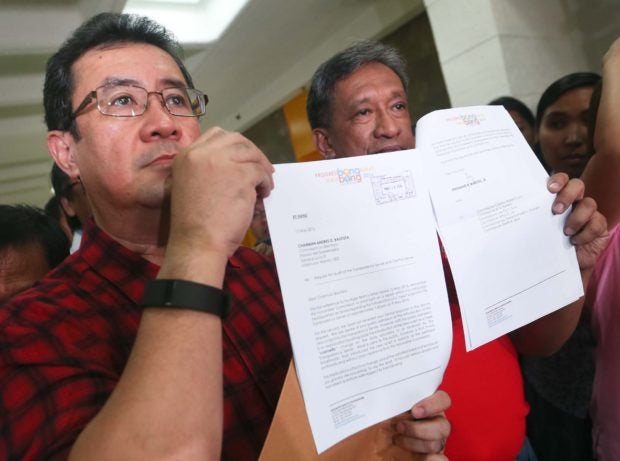 The lawyer of leading vice presidential candidate Maria Leonor “Leni” Robredo for the canvassing of votes for the vice presidency twitted the camp of Senator Ferdinand “Bongbong” Marcos Jr. for requesting a systems audit, saying that the move shows that the senator does not have evidence to substantiate his allegations of poll fraud.

Atty. Romulo Macalintal tagged the request of the Marcos camp for a systems audit as a “very desperate move.”

“That is a very desperate move for Senator Marcos. He is asking the Comelec to develop his case for him. Para bang sinasabi niya sa Comelec, bigyan mo nga ako ng ebidensiya. Yang pag-file na yan ay pagpapatunay na walang ebidensiya si Mr. Marcos sa mga sinasabi niyang umano’y mga katiwalian o pagkakamali sa bilang (It’s like he’s telling the Comelec, give me evidence. Filing that request shows that Mr. Marcos has no evidence of what he alleges as corruption or faults in the count),” Macalintal told reporters on Wednesday.

The seasoned election lawyer said that Marcos should rely on the strength of his evidence and not rely on the findings of the Comelec following the conduct of the systems audit.

“The Comelec will never develop the case of Mr. Marcos. Mr. Marcos is to present his own evidence. Mr. Marcos should rely on the strength of his evidence and not on speculations or baseless accusations,” he said.

READ: Marcos: Will do everything so people’s ‘true will’ prevails

For candidates to prove that there was poll fraud, Macalintal advised them to present an election return that does not match the unofficial tally reflected on the Comelec’s transparency server.

(If they can’t show any of those, and are speaking purely out of speculation that their votes diminished, that is not evidence. Real evidence would be their authentic copy that the document does not tally with the Comelec or the PPCRV.)

In an interview in Naga City, Robredo welcomed his rival’s request for a systems audit in order to dispel all doubts about the results of the polls.

(I am not opposed to a system audit. I agree that there should be a system audit to remove all doubt about the integrity of the elections.)

Marcos wants a systems audit to determine the extent of the effect of the “unauthorized” tweak of the script in the Comelec’s transparency server during election day.

Both Comelec and Smartmatic maintained that the change in the script did not affect the results of the elections.

His camp also alleged that they have found several irregularities in the tabulation of some certificates of canvass nationwide.

According to the PPCRV and Comelec unofficial tally, Robredo is leading by 219,127 votes. CDG