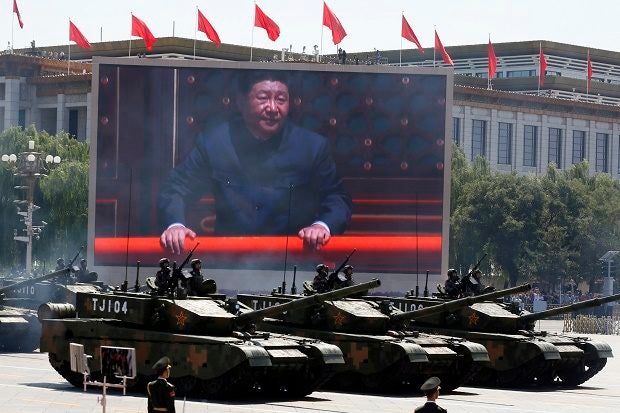 In this Thursday, Sept. 3, 2015 file photo, Chinese President Xi Jinping is displayed on a screen as Type 99A2 Chinese battle tanks take part in a parade commemorating the 70th anniversary of Japan’s surrender during World War II held in front of Tiananmen Gate in Beijing. Chinese President Xi Jinping is assuming a more direct role as commander of the country’s powerful armed forces with the new title of commander in chief of its Joint Operations Command Center, as revealed in news reports run on Wednesday, April 20, and Thursday, April 21, 2016, in which he appeared publicly for the first time in camouflage battle dress wearing the center’s insignia. AP FILE PHOTO

The Defense Ministry said Wednesday the air, land and sea drills were aimed at “testing and upgrading the ability to respond to security threats and complete military missions.”

The drills were “not aimed at any specific target and relevant persons shouldn’t read too much into it,” the ministry said. The statement in question-and-answer format did not mention Taiwan.

China maintains a standing threat to use force to achieve its goal of absorbing Taiwan and the timing of the drills was noticed widely both on Taiwan and in China’s entirely-state controlled media.

Without detailing the consequences, Beijing has warned that delicate relations between the sides would be destabilized unless Taiwanese President-elect Tsai Ing-wen explicitly endorses Beijing’s view that Taiwan and the mainland are both part of a single Chinese nation. The outgoing Nationalist Party government of Ma Ying-jeou endorsed the so-called “’92 Consensus” and signed a series of agreements on trade and other non-political topics during its eight years in power.

China last staged military drills and missile launches in 1995-96 in a bid to intimidate voters ahead of Taiwan’s first direct presidential elections. The effort was seen as an abject failure that further alienated Taiwanese from Beijing.

Chinese state media said the latest drills involved mock landing operations and the use of attacks helicopter and tanks. The largest drills were carried out by the People’s Liberation Army’s 31st Group Army based in the city of Xiamen that looks directly out onto the 100 mile (160 kilometer)-wide Taiwan Strait, the China Daily newspaper said.