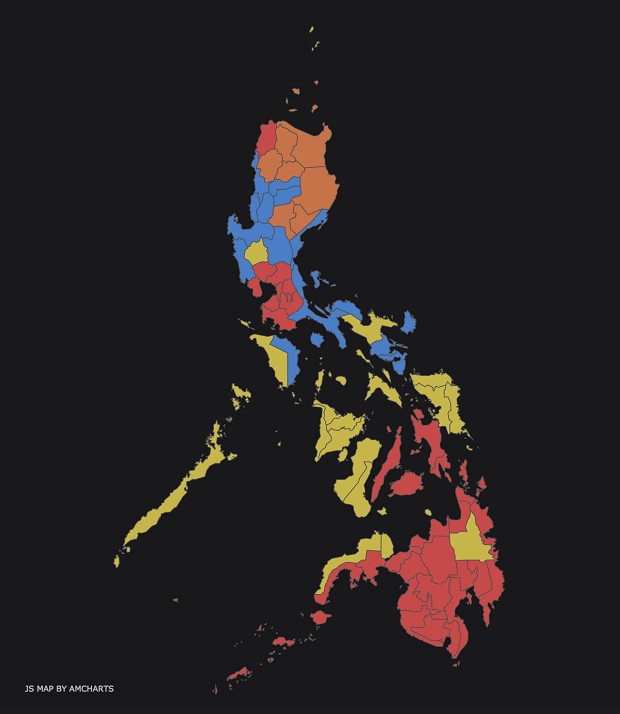 The staggering lead of presumptive President Rodrigo Duterte over his rivals should come as no surprise. The southern island group voted overwhelmingly for the Mindanawan, who should also credit his victory to key vote-rich provinces in Luzon and the Visayas.

A little over a million votes from the Visayas and Mindanao, as well as overseas absentee votes, have yet to be transmitted to the transparency server, from which the Parish Pastoral Council for Responsible Voting (PPCRV) and media outlets, like the Inquirer, get their results. Results from the transparency server are regarded as partial and unofficial.

As expected, the meat of Duterte’s lead was in the bloc voting of an emerging “Solid South” alliance, which had  delivered over 5 million votes as of 9:43 a.m.

In the Davao region, Duterte won 1.8 million votes, or close to 90 percent of all votes tallied in the quick count. An estimated 67 percent of votes from Socckskargen went to the Mindanawan.

Only in three provinces in the southern island group did the Davao City Mayor fail to lead the presidential race: Agusan del Sur, Misamis Occidental and Zamboanga del Norte, which all voted for Liberal Party candidate Manuel “Mar” Roxas II. The race, however, was tight. In Zamboanga del Norte, for instance, the former secretary of the Department of the Interior and Local Government led  by only around 4,000 votes.

Roxas has garnered 9,666,554 votes as of 9:43 a.m. on May 12. As expected, Western and Eastern Visayas voted predominantly yellow, along with Tarlac, Camarines Sur, Mindoro Occidental, Palawan, Romblon and Masbate provinces in Southern Luzon.

In an interview with former North Cotabato Gov. Manny Piñol before Election Day, the camp of the Davao mayor anticipated a high turnout in the two capital cities, based on the surveys and his social media popularity.

Piñol, in the same interview, was also optimistic that a large number of Ilocanos residing in Mindanao would provide the support the mayor needed to win the presidency–more than 14 million votes, the lowest possible number needed to ensure a landslide victory.

BACKSTORY: How will Duterte get the 14M votes he needs to win?

In the surveys leading up to May 9, Duterte was preferred by 32 to 33 percent of Filipinos, according to the last published surveys of Social Weather Stations, Pulse Asia and Junie Laylo.

No ‘Solid North’ in presidential race

But while the Solid South delivered big for Team Duterte, the long-standing Solid North, which Piñol had expected to swing red, was split two ways in favor of two other candidates: Region II voted overwhelmingly in favor of outgoing Vice President Jejomar Binay, who also led in Apayao, Abra and Kalinga. Sen. Grace Poe, on the other hand, led in Ilocos Sur, La Union, Pangasinan, Mountain Province, Ifugao and Benguet.

Duterte did not place first in any of northern Luzon’s provinces save for Ilocos Norte, a known Marcos bailiwick.

The Solid North voting bloc typically refers to Regions I, II and the Cordillera Administrative Region.

The votes for Poe were a far cry from her camp’s expected turnout. In another interview with former Secretary Ace Durano, the campaign manager of Partido Galing at Puso, the Poe camp had estimated that more Filipinos in Central Luzon and the Visayas regions would choose the newbie senator.

BACKSTORY: How will Poe get the 14M votes she needs to win?

Overseas absentee voters have also voted overwhelmingly in Duterte’s favor. Of the over 300,000 Filipino voters living abroad, more than 100,000 cast their ballots for Duterte.

While the total number of votes will be determined only after Congress completes its own canvassing, the Davao city mayor’s unofficial 15,877,848 votes have already surpassed the 15,208,678 votes outgoing President Aquino received when he won in 2010. CDG/rga