How will Poe get the 14M votes she needs to win? | Inquirer News
Close
menu
search

How will Poe get the 14M votes she needs to win? 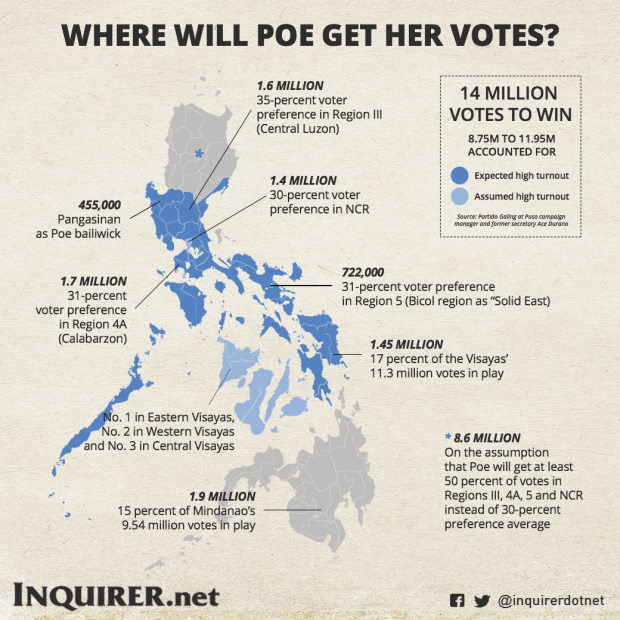 Where will Grace Poe get her votes? GRAPHIC BY SARA PACIA, INQUIRER NEWSLAB

For Senator Grace Poe to become the next president, the famous foundling discovered in Iloilo City in the Visayas must bank on a solid showing in Luzon — where 55 percent of voters registered for the 2016 elections are found.

We make three key assumptions in this news analysis:

First: Of the 54.4 million Filipinos registered to vote in the Philippines on May 9, at least 75 percent will turn out to vote — the same turnout rate as in the last presidential elections, in 2010. It is highly possible that this year’s tightly contested race will draw more voters to the polling centers, but for purposes of estimating the winning threshold, we are confident a 75-percent turnout is adequate.

And third: The front-runner in the last six to eight weeks of the three-month campaign recorded a voter preference rating of about 33 percent, in the last round of scientific surveys. If we assume that in the last few days consolidation will push this number to 35 percent, then we estimate the winner’s threshold at 14,280,000 votes.

Where will Poe get at least 14 million votes?

At least 8 to 10 million will come from Luzon, former Secretary Ace Durano, the campaign manager of Partido Galing at Puso, told INQUIRER.net.

“Yung 8 to 10 million sa Luzon, of course the bulk of that will be coming from the big provinces, like Pangasinan,” Durano said.

Pangasinan is the anchor of Poe’s election strategy; she barnstormed the province, with 1.7 million voters the third largest prize among the country’s 81 provinces, several times during the 90-day campaign. She even had a separate “miting de avance” (final campaign rally) in Pangasinan on the morning of May 7, before she met her supporters in Plaza Miranda in Manila at night.

With a 75-percent turnout, Pangasinan has 1.3 million votes in play. The final pre-election survey of Standard/Laylo Report, conducted April 27 to May 1, shows Poe enjoying a plurality of support in Central Luzon, with 35-percent voter preference. That’s about 455,000 votes, for Pangasinan alone.

If Poe holds all of Central Luzon at the same rate, the arithmetic looks like this: 75 percent of 6 million voters is 4.5 million; and 35 percent of 4.5 million votes is about 1.6 million. This brings her total to about 2.1 million.

Region 4A, or Calabarzon (for the provinces of Cavite, Laguna, Batangas, Rizal, and Quezon), accounts for 7.6 million voters and, at a 75-percent turnout, 5.7 million votes. The Standard/Laylo Report records a 31-percent level of support for Poe in the area (as well as in neighboring Bicol). If the elections reflect this level of support, Poe will claim at least 1.7 million votes — bringing her total to 3.8 million.

Bicol may be called the Solid East — the cities and provinces have a reputation for voting as a bloc for Bicolano senators or, in the case of the first campaign of Sen. Raul Roco, Bicolano presidential candidates. Region 5 has 3.1 million registered voters; a 75-percent voter turnout would mean 2.325 million votes are at stake. If 31 percent are for Poe, she would add 720,000 votes to her total, bringing the number to over 4.5 million.

There is a reported surge of late support for Poe in the National Capital Region, which has 6.25 million voters and, with an assumed 75-percent turnout, 4.7 million votes in play. If we assume that her 25-percent level of support has risen to 30 percent in the NCR in the days since the last Pulse Asia survey was conducted from April 26 to 29, that means she will gain 1.4 million votes, to bring her total to over 5.9 million.

The total is nowhere near the “8 to 10 million” votes in Luzon that Durano based his estimate on. For the Poe campaign to gather at least 8 million votes in Luzon, especially in the so-called Lingayen to Lucena corridor, it would have to do much better on Election Day than it did in the last surveys.

If, for instance, she gets 50 percent of the expected number of votes cast (an unusually dominant performance, in a relatively tight contest) in Region 3, Region 4A, NCR, and Region 5, her total would reach 8.6 million votes, closer to Durano’s estimate. Influential Albay Governor Joey Salceda’s switch from the administration coalition’s Mar Roxas to Poe may be a positive factor in Bicol.

“We’re looking at between 15 to 20 percent,” Durano said of Mindanao’s 12.6 million voters. Poe is polling only at 11 percent in Mindanao, according to Pulse Asia, but assuming that last-minute developments in the turbulent race have pushed her numbers upward, to 15 percent, she can lay claim to 1.4 million votes of the 9.45 million votes in play. A 20-percent share would add 1.9 million to her highly conditional total of 8.6 million, to bring the total to 10.5 million.

In the Visayas, Durano only noted that for “Eastern Visayas, Sen Grace is first,  Western Visayas  we’re second but were closing in, Central Visayas we’re third.”

As in Luzon and NCR, so in the Visayas and Mindanao: Poe will have to do much better on the ground than she did in the surveys, to reach the 14 million votes she needs to become the country’s third woman, and first foundling, president.

Editors’ Note. Only the Poe, Roxas, and Duterte campaigns shared the information we needed to produce a Path to Victory piece. The Santiago camp offered information that was too general to use; the Binay campaign declined to offer any information.