How will Duterte get the 14M votes he needs to win? | Inquirer News
Close
menu
search

How will Duterte get the 14M votes he needs to win? 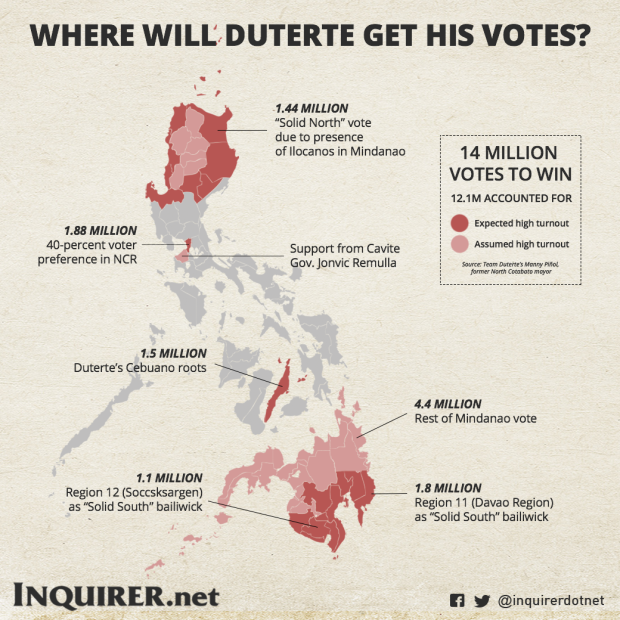 For Davao City Mayor Rodrigo Duterte to become the next president, the old Solid North will have to partner with an emerging Solid South. And the great urban centers of Metro Manila and Cebu will provide the link between the two.

We make three key assumptions in this news analysis:

First: Of the 54.4 million Filipinos registered to vote in the Philippines on May 9, at least 75 percent will turn out to vote — the same turnout rate as in the last presidential elections, in 2010. It is highly possible that this year’s tightly contested race will draw more voters to the polling centers, but for purposes of estimating the winning threshold, we are confident a 75-percent turnout is adequate.

And third: The front-runner in the last six to eight weeks of the three-month campaign recorded a voter preference rating of about 33 percent, in the last round of scientific surveys. If we assume that in the last few days consolidation will push this number to 35 percent, then we estimate the winner’s threshold at 14,280,000 votes.

Where will Duterte get at least 14 million votes?

For the first time since the first national elections in 1907, Mindanao will be the basic building block of a winning mandate. According to the April 26-29 Pulse Asia survey, 58 percent of Mindanao’s 12.6 million voters will cast their ballot for Duterte.

If that estimate still holds, that’s 7.3 million votes, or slightly over half of what the controversial tough-talking mayor of the country’s largest city in size needs to lay claim to Malacañang.

One of his staunchest supporters, former North Cotabato governor Manny Piñol, told INQUIRER.net that Duterte will receive 92 percent of the votes in Region 11, which groups Davao City and the Davao provinces. That is likely too optimistic; when Duterte ran for mayor in 2013, he received just a simple majority of the vote in his city. Given that his candidacy is the first presidential run of a genuine Mindanawan, however, we can use Piñol’s estimate advisedly, by factoring in a 92-percent share but with a voter turnout of 75 percent.

Piñol also says Duterte will receive up to 70 percent of Southwestern Mindanao’s votes. Region 12 has 2.1 million registered voters; 70 percent of a 75 percent turnout is about 1.1 million votes.

Roughly speaking, then, about 3 million of Duterte’s expected 7.3 million votes from Mindanao will come from what many consider his bailiwicks, what we can call the new Solid South.

Ferdinand Marcos’ Solid North — Regions 1 and 2, on which he depended in the 1965, 1969, 1978, and 1986 elections — was not much of a factor after the Edsa Revolution, until his son, first-term Senator Bongbong Marcos, launched his campaign for the vice presidency.

Region 1, the Ilocos provinces, has a total number of 2.9 million registered voters. Region 2, Cagayan Valley, has 1.9 million. A 75-percent turnout rate will mean 3.6 million from the two regions will troop to the polls. Marcos’ official running mate is Senator Miriam Defensor Santiago, but as the Duterte-Marcos campaign posters in Davao City attest, Duterte and Marcos share not only an admiration for the Marcos presidency but an appreciation for each other.

“Many Ilocanos are in Mindanao so [we’re] hoping that they’ll convince their relatives in the north to vote for Duterte,” Piñol said. There’s that too. If Duterte wins at least 40 percent of the 3.6 million votes at stake in Regions 1 and 2, about the same level of support then-Makati Mayor Jejomar Binay received in the area when he ran for vice president in 2010, then Duterte can gain another 1.44 million votes — bringing his total to 8.74 million.

Cebu is the province with the most number of voters, at 2.8 million. With a 75-percent turnout, Cebu will have as many as 2.1 million votes in play.

Duterte has only a 26-percent voter preference rating in the Visayas, in the last Pulse Asia pre-election survey. But his campaign in Cebu has organized itself to capture an ambitious 1.5 million votes — roughly the same level of support Gloria Arroyo received from the island in 2004. Assuming Duterte will enjoy the same level of support, his total will now breach the 10-million mark, with 10.24 million votes.

Piñol has a ready explanation for the campaign’s confidence in their Cebu operation. “Duterte has roots in Cebu and nobody is campaigning against him in Cebu; that’s his advantage.”

In the National Capital Region, Duterte enjoys a 40-percent preference rating. If that number holds on Election Day (a considerable if, given Sen. Grace Poe’s reported surge in the NCR), 4.7 million voters will head to the polls in Metro Manila. (Again, with a 75-percent voter turnout.) Of that number, 1.88 million will vote for Duterte.

This brings Duterte’s total to 12.1 million votes — from just five regions and the island of Cebu. Various other permutations (Cavite voting in force, one-fourth of the total Visayas vote of 11 million goes to him, and so on) will bring his total over the winner’s threshold of 14 million. Duterte’s path to victory runs straight./rga

Editors’ Note. Only the Duterte, Poe, and Roxas campaigns shared the information we needed to produce a Path to Victory piece. The Santiago camp offered information that was too general to use; the Binay campaign declined to offer any information.

Read Next
Heart Evangelista: ‘It was all worth it’
EDITORS' PICK
Nestlé Philippines’ ‘NESCAFÉ Plan’ bags Grand Anvil at PRSP 56th Anvil Awards
Pope Francis to meet top cleric Sistani on second day in Iraq
Smart reinforces superiority with best speed and mobile video experience in PH
Don’t waste the hope of vaccines, warns WHO
Every Filipino home can now be a smart home with realme TechLife
822 NPA-free barangays set to get P20-M gov’t aid — Esperon
MOST READ
So: I lacked connections to succeed in PH ‘culture’
Gerald admits being with Julia, reveals breakup with Bea through ‘too many conversations’
Robredo on Sara Duterte leading poll surveys: Why are Filipinos drawn to leadership of this kind?
Giant clams worth P160M seized in Palawan raid
Don't miss out on the latest news and information.