From pope to penis, Duterte shocks with trash talk 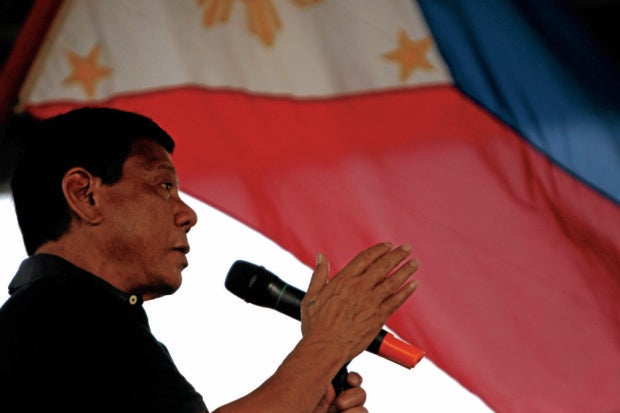 Presidential favorite Rodrigo Duterte has hypnotized his fans and outraged critics with swearing, gutter talk and threats to kill throughout an explosive election campaign.

Here are the five of the most provocative remarks of the long-time mayor of the southern city Davao, who is known as the “Punisher” or the Philippines’ “Dirty Harry”:

“They raped all of the women. There was this Australian lay minister. When they took them out, I saw her face and I thought, ‘Son of a whore. What a pity. They raped her, they all lined up. I was mad she was raped but she was so beautiful. I thought, the mayor should have been first.’” — Duterte on the campaign hustings in April, recounting a 1989 prison riot in Davao

“It took us five hours to get from the hotel to the airport. I asked who was coming. They said it was the pope. I wanted to call him. ‘Pope, son of a whore, go home. Don’t visit anymore.’” — Duterte in a November speech recalling being stuck in Manila traffic when Pope Francis visited the Philippines in January 2015

“I do not want to commit a crime but if by chance, God will place me (in the presidency), watch out. The 1,000 (I allegedly killed) will become 100,000. That will fatten the fish in Manila Bay. I will dump their bodies there.” — Duterte in a June 2015 interview, referring to his plans to fight crime by killing suspected criminals

“Forget the laws on human rights. If I make it to the presidential palace, I will do just what I did as mayor. You drug pushers, hold-up men and do-nothings, you better go out. Because as the mayor, I’d kill you.” — Duterte revels in his disregard for human right laws in his final campaign rally on Saturday

“I was separated from my wife. I’m not impotent. What am I supposed to do? Let this hang forever? When I take Viagra, it stands up.” — Duterte in an April address to the nation’s premier business group, defending his reputation as a womanizer.

How will Duterte get the 14M votes he needs to win?

Duterte will be last to vote among presidential candidates