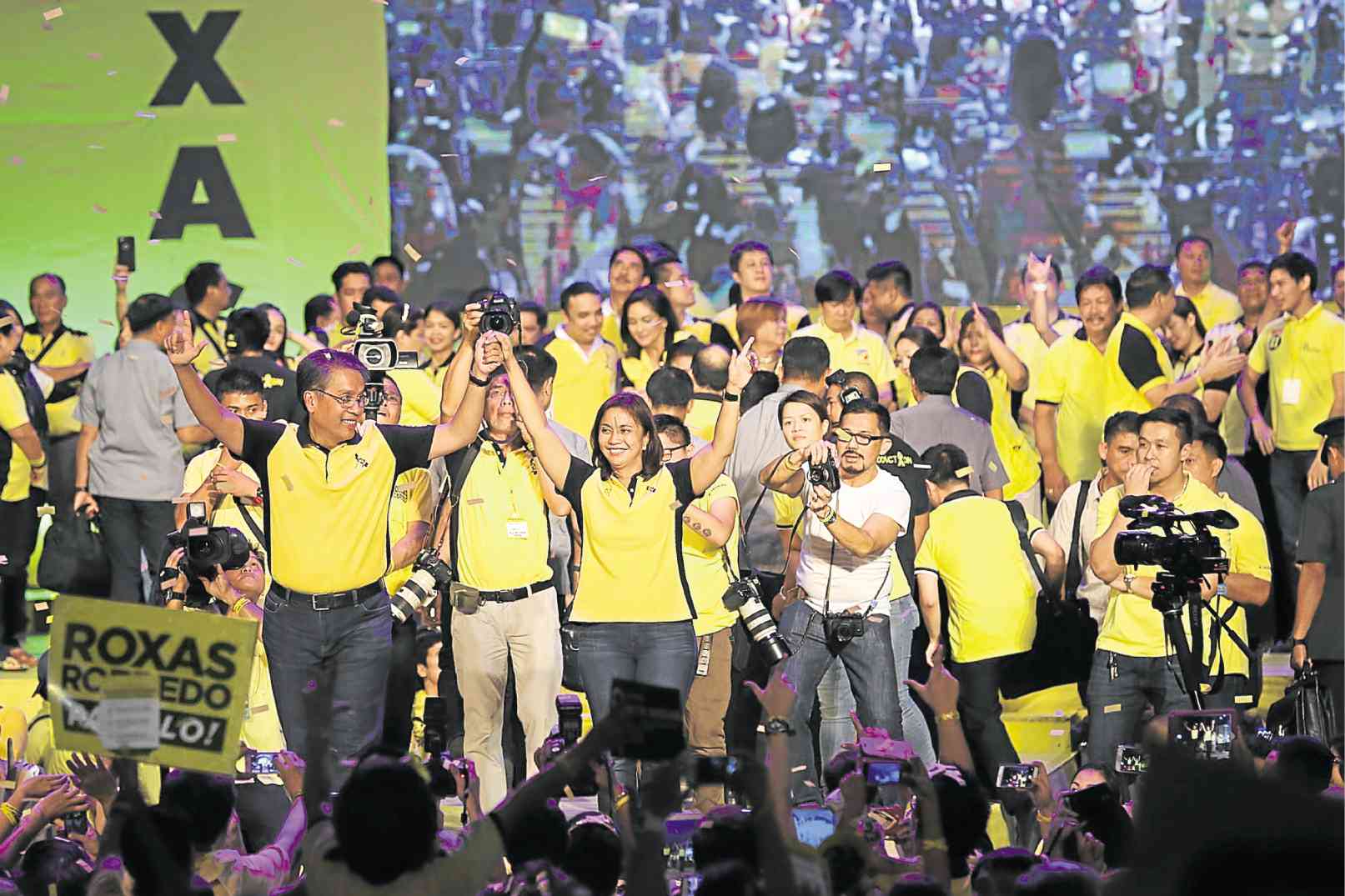 President Benigno Aquino III has appealed to Filipinos not to vote for front-runner Rodrigo Duterte, warning that “dark days” could return to the Philippines if the tough-talking mayor of Davao City captured Malacañang.

“Like you, I have only one vote. Alone, I cannot ensure that dark days will not return to our motherland. I need the help of all of you,” Mr. Aquino told a crowd of 150,000 who came to the final rally for his chosen presidential candidate, Mar Roxas, at Quezon Memorial Circle in Quezon City on Saturday night.

It was Mr. Aquino’s most scathing speech of the three-month presidential campaign that ended on Saturday with the foul-mouthed Duterte maintaining a huge lead in voter preference polls over his two rivals, Roxas and Sen. Grace Poe.

Duterte has captured the admiration of millions of Filipinos with his promises of killing tens of thousands of criminals outside the justice system and ending official corruption.

At his final rally in Manila’s Rizal Park on Saturday night, Duterte told 300,000 supporters that there would be mass killings under his presidency and that he would butcher criminals right in front of human rights campaigners or other critics.

Such talk, often laden with expletives, has outraged critics and rivals, but propelled Duterte to the head of the presidential race, alarming President Aquino, who took the lead in warning voters about an

“impending dictatorship” in the closing days of the campaign.

At the ruling Liberal Party’s final rally for Roxas and his vice presidential running mate Leni Robredo, Mr. Aquino appealed to the crowd to talk to their families and friends who were “likely still confused or have lost their way” in choosing the country’s next leader.

He warned of a return of the Philippines to the old days under a Duterte presidency, tossing out the gains his administration achieved in the past six years.

Mr. Aquino said he had been wondering how Duterte, the “exact opposite of the good manners and values” taught to every human being, was leading in the voter preference polls for the presidential election.

He said that in 2010, as the administration of then President Gloria Macapagal-Arroyo was coming to an end, the economy began to pick up.

Now the opposite is happening, he said.

“As the possibility grows of him becoming the next President, the value of the peso has begun to drop,” Mr. Aquino said.

The stock market is jittery, he added.

READ: Stocks down ahead of polls

The President reminded his audience that a public official’s failure to declare his finances was a violation of the Constitution, and challenged Duterte to sign a waiver that would allow the public to scrutinize his bank accounts.

“But instead of answering the allegations, he now asks people to respect the rights he is so ready to deny others,” Mr. Aquino said.

The President was not as pugnacious in speaking about Duterte in recent weeks, but no one was prepared for his attack on the mayor on Saturday.

“Today is the last day of the campaign. On Monday, we will troop to the polls to vote for our new leaders. It is as if by fate that tomorrow the world will celebrate Mother’s Day. It is good to remember the good manners that our mothers have taught us. My own mother told me not to cuss and to respect our fellowmen,” Mr. Aquino said, drawing cheers from the mostly yellow-clad crowd.

Mr. Aquino continued: “And because I have four sisters, I was taught not to disrespect women. I was taught that as a true Christian, I should foremost follow the Ten Commandments, including ‘Thou shall not kill.’”

Once again the crowd burst into cheers and applause.

“But what does he mean by change? He said: I will fix this country. But to me: Is our country truly in tatters? We said this in 2010. And our promise was we would leave the Philippines in a much better situation than when we took over,” Mr. Aquino said.

He gave examples of what his administration had achieved, which had the crowd chanting “P-Noy” in a show of appreciation for the good work he had done.

In his six years in office, Mr. Aquino said 185,000 classrooms were built nationwide; 1.7 million former street children were now studying, and only 5.2 percent of young Filipinos were out of school.

PhilHealth coverage has reached 93 million Filipinos and the government continues to expand the membership, he added.

President Aquino also expressed concern over Duterte’s bombastic statements with regard to the country’s maritime row with China.

The Philippines, Mr. Aquino said, has earned allies, from Southeast Asia, Europe, the Americas and Australia—even at the risk of affecting their own economies, as China was their trade partner as well.

“Doesn’t he understand that whatever comes out of his mouth affects the whole Philippines?” Mr. Aquino stressed, drawing yet another loud cheer from his audience.

With some 50 days left in office, the President emphasized that Roxas and Robredo were the ones who could truly lead the Philippines.

“The most significant thing is they are the ones who would continue to bring integrity to government and give real public service to our people—not just in words but, more important, in deeds,” he added. TVJ
RELATED VIDEOS