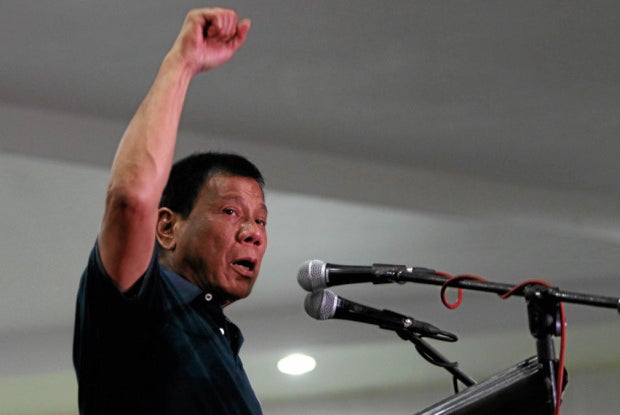 Duterte, who has hypnotized millions of voters with his promises to eradicate crime and corruption, repeatedly warned tens of thousands of fans in Manila on Saturday night that there would be mass killings under his presidency.

“Forget the laws on human rights,” said Duterte, as he boasted of killing criminals during his more than two decades as mayor of the southern city of Davao.

READ: Duterte’s shocking, shrewd shot at the Philippine presidency | Duterte to Filipinos: I am ready to be PH father

“If I make it to the presidential palace, I will do just what I did as mayor. You drug pushers, hold-up men and do-nothings, you better go out. Because as the mayor, I’d kill you.”

In his 90-minute speech, the last of his campaign, Duterte said he would be prepared to kill a criminal even in front of human rights campaigners or other critics.

“I will butcher him in front of them if they want,” he said.

Duterte, 71, has made his threats to kill criminals the centerpiece of his campaign strategy, outraging critics but winning the hearts of many in an electorate who are fed up with lawlessness and corruption.

Duterte, who has also used foul language to help cast himself as an anti-establishment figure, has a lead of 11 percentage points going into Monday’s election, according to the latest survey.

Senator Grace Poe, the adopted daughter of a late movie star, and establishment bedrock Mar Roxas, are tied in second place. Vice President Jejomar Binay, the early favourite, has fallen to fourth place under the weight of a barrage of corruption allegations.

Aside from his cuss-filled promises to kill, Duterte has rocked the political establishment with threats to instill one-man rule if lawmakers disobey him and create a revolutionary government that could rewrite the Constitution.

He has also caused disgust in international diplomatic circles with a joke that he wanted to rape a “beautiful” Australian missionary who was killed in a 1989 Philippine prison riot, and boasted repeatedly about his Viagra-fueled affairs.

President Benigno Aquino, whose mother led the democracy movement that ousted dictator Ferdinand Marcos a generation ago, has repeatedly warned the nation is at risk of succumbing to another dictatorship.

At Roxas’s final campaign rally, which took place on Saturday at the same time as Duterte’s on the other side of Manila, Aquino launched his fiercest verbal attack yet on the insurgent candidate, likening his rise to that of German Nazi leader Adolf Hitler.

“I need your help to stop the return of terror in our land. I cannot do it alone,” Aquino said, urging Filipinos to learn from history.

“We should remember how Hitler came to power. If you allow them to oppress your fellow man and you do not speak up, you will be the next one to be oppressed.”

Duterte responded on Saturday to Aquino’s previous criticism of him by describing the President as a “son of a whore”.

Duterte also elaborated on his rule of Davao, where rights groups have accused him of being behind vigilante death squads that killed more than 1,000 people.

The mayor says he has turned the city of roughly two million people into one of the safest and wealthiest in the country, and is promising to do the same for the rest of the country.

“There will be no corruption in government. If you don’t believe just go to Davao and see. When I say I will make (a criminal) eat a bullet, you must believe me,” he said.

Among the attendees was 84-year-old housewife Zenaida Gobangco, who said she would vote for Duterte.

“He is sincere. When he says he will kill criminals, it is just right that we have a leader people fear,” she said.

While Duterte is undeniably the favorite, he lacks the sophisticated political machinery of some of his rivals and is not guaranteed victory, according to Manila-based political analyst Earl Parreno.

Roxas, a US-educated investment banker who served as interior and transport secretaries in Mr. Aquino’s administration, is in the strongest position to challenge him, Parreno, from the Institute of Political and Electoral Reforms, told AFP.

Roxas can expect a boost of about five percentage points from the machinery of the Liberal Party, which can use its money and influence to get people into voting booths, he said.

“We also still have the undecided. It’s going to be a very, very close fight,” Parreno said.