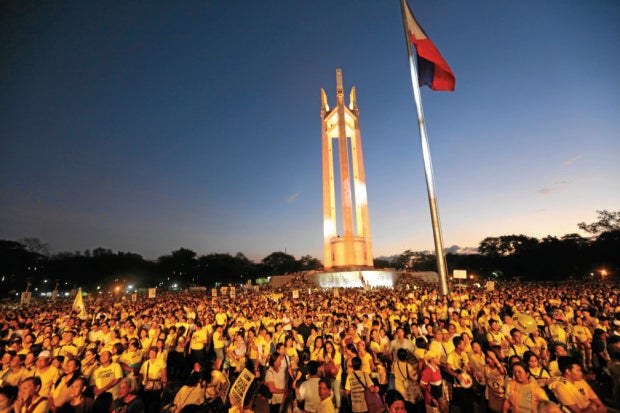 Victory will be ours, an upbeat Mar Roxas, the Liberal Party (LP) standard-bearer, said on Saturday despite the seemingly insurmountable odds presented by front-runner Davao City Mayor Rodrigo Duterte.

Before rushing off to the LP’s miting de avance in Quezon City, Roxas called on supporters to close ranks and prove that “most Filipinos remained decent.”

“The (election) is not about Mar Roxas (nor) any single person,” Roxas said. “This has to do with what may happen to our country after the elections,” he added. “We’re fighting for the dreams of 100 million Filipinos.”

At Quezon Memorial Circle later in the afternoon, President Aquino and members of his Cabinet led a crowd of 150,000 in sending off Roxas and running mate Leni Robredo during their final rally before Election Day on Monday.

“I’m here because I want my voice to be heard against a looming dictatorship,” said Marlyn Estancia, 61, a market vendor from Caloocan City who attended the event along with her neighbors.

“I’m here to show that majority of Filipinos still believe in the programs that President Aquino introduced, like the 4Ps,” she said, referring to the government’s Pantawid Pamilyang Pilipino Program.

Jojo Gonzales, a call center agent, said he and wife Arminda traveled from their Lipa City home “to prove that the ‘silent majority’ is real.”

“Like my wife and myself,  there are supporters of Roxas and Robredo who are afraid to campaign for them openly because of the bullying and harassment from supporters of other candidates,” Gonzales told the Inquirer.

“Tonight we wanted to show that we’re not afraid to stand up for our democracy and our children’s future. The silent majority will win this not for Roxas and Robredo, but for our country,” he added.

Roxas, President Aquino’s anointed, earlier declared that he was “confident” that he would win. “The momentum is with us because the undecided voters are favoring us. Another major factor is the ‘silent majority,’ which is not silent anymore.”

The LP candidate also denied rumors that he had suffered a heart attack or that he had opted to drop out from the race for Malacañang two days before Election Day.

“I’m here, very much alive. I don’t have any ailment,” a smiling Roxas told reporters. “It’s crystal clear: Our fight continues. We will continue this fight.”

Addressing his supporters, Roxas said:  “They have thrown all kinds of allegations to break us. But we’re still here. We’re still wearing yellow and we’re getting stronger. We will win this.”

Roxas, who on Friday issued an invitation for a unity talk with rival Sen. Grace Poe on national television,  admitted that he was saddened by Poe’s public rejection of his call that, he said, was meant to avert  the possibility of a Duterte presidency.

But he refused to disclose the matters he had wanted to discuss with Poe, saying it was “useless” to speculate what could have been the result of the meeting.

“We will never know what could have happened if the meeting (had) pushed through,” he said. “It would be useless (to discuss it).”

Pressed if he wanted Poe to give way to his presidential bid, Roxas repeated, “As I said, we would never know because she did not give (the meeting) a chance.”

He had “voluntarily initiated efforts for the unity talk,” the LP candidate said, “(because) the issue was really about the good of the majority. The issue was our country and the forces of democracy (versus) the force of dictatorship.”

House Speaker Feliciano Belmonte Jr. said Roxas’ experience as a long-time public servant and as a former investment banker made him the most qualified among the five presidential aspirants.

Without mentioning his name, Belmonte took a swipe at  Duterte, the foul-mouthed Davao City mayor, who had warned of public executions and extrajudicial killings to eradicate crimes within the first six months of his presidency.

“The presidency is not about the quickest in drawing the gun, or the best in fist-fighting,” Belmonte said. “What we need is someone who knows how to run the economy, how to create jobs and how to bring good food to our table,” he added.

“I have known Mar Roxas for a long time. I know his skills and capabilities. We don’t need somebody who is heavy-handed, and who espouses killing people without due process,” the House official said.

“We should not let the dark years (of dictatorship) return again,” De Lima told the crowd who broke into cheers.