Korea leader says will use nuclear weapons if sovereignty ‘encroached’ 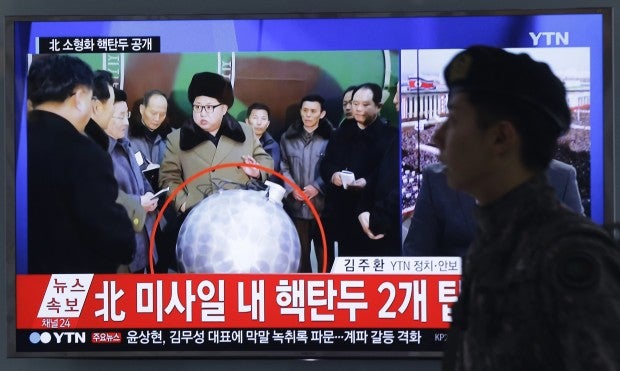 A South Korean army soldier walks by a TV screen showing North Korean leader Kim Jong Un with superimposed letters that read: “North Korea’s nuclear warhead” during a news program at Seoul Railway Station in Seoul, South Korea, Wednesday, March 9, 2016. The official North Korean news agency says the communist country’s leader Kim met his nuclear scientists for a briefing and declared he was greatly pleased that warheads had been miniaturized for use on ballistic missiles. AP

SEOUL, South Korea — North Korean leader Kim Jong-Un told a ruling party congress that the country would only use its nuclear weapons if its sovereignty came under threat from another nuclear power, state media said Sunday.

“As a responsible nuclear weapons state, our republic will not use a nuclear weapon unless its sovereignty is encroached upon by any aggressive hostile forces with nukes,” Kim was quoted as telling the party gathering in Pyongyang on Saturday.

He also promised that Pyongyang would “faithfully fulfil” its non-proliferation obligations and push for global denuclearization.

North Korea withdrew from the global Non-proliferation Treaty (NPT) in 2003 — the first signatory country to do so.

At the time of its first nuclear test in 2006, North Korea had said it would “never use nuclear weapons first”, but has since made repeated threats of pre-emptive nuclear strikes against South Korea and the United States.