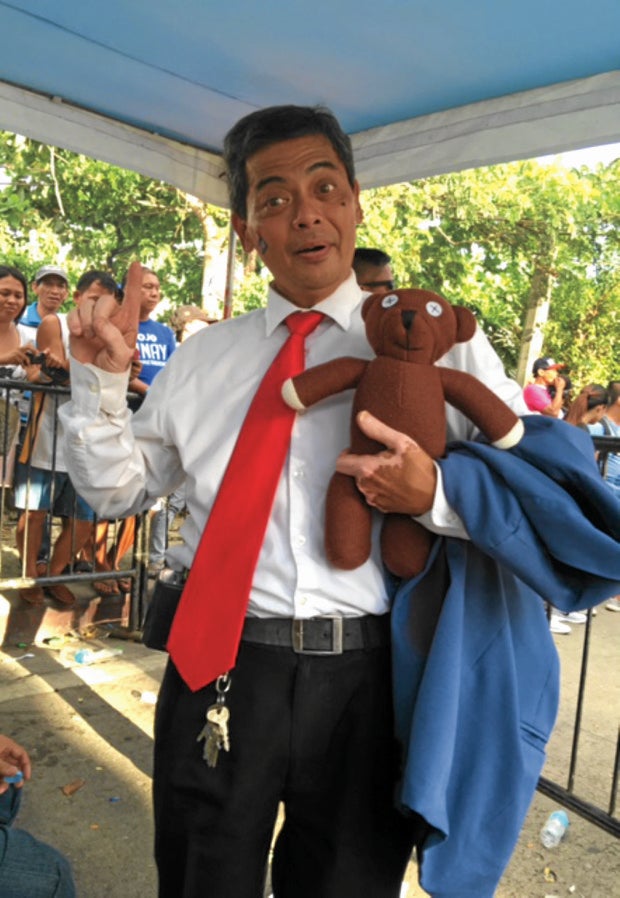 Clutching a teddy bear, the man in a business suit and red tie walked into a restricted area behind the stage, seemingly out of place amid a sea of blue shirts.

While he could be easily dismissed as an unwelcome outsider, Roger Ocampo, it turned out, is closer to the main man than one might think. Just a few hours ago, he was at Vice President Jejomar Binay’s house, he claimed. “He really liked my song.”

Ocampo has played the British comedy character for five years, from the suit and tie to the teddy bear and the mole, and has upped his act to back his bet, carrying his very own speaker on his belt that plays the Binay campaign jingle on cue.

“I was for Noy-Bi before,” said Ocampo, in reference to his 2010 preference for President Benigno Aquino III and the Vice President.

“Of course now that Binay is running for President, I am supporting him. Because it’s true. He’s the only one who has done something and who could do more,” he said, citing the lyrics of the Binay jingle.

Ocampo is one of the volunteers supporting Binay’s candidacy, tailing the United Nationalist Alliance  campaign where he could, still wearing his blazer despite the stifling heat.

“Look at how progressive Makati is. Senior citizens have their medicines delivered at their homes,” said Ocampo, 57, a father of two.

Ocampo, who claims he was dismissed from the Philippine Amusement and Gaming Corp. (Pagcor) after 15 years for waging a solo protest against its leaders, is pinning his hopes on Binay for the next six years.

He regards himself as jobless, his livelihood of fishball vending and stand-up gigs largely unstable.

While he said fighting corruption had cost him his Pagcor job, Ocampo has long brushed aside corruption allegations against Binay, saying: “The Senate had so many hearings but they did not find any strong evidence that Binay is corrupt.”

And while his bet may be trailing in the surveys, Ocampo is not convinced.

“I have done my own survey in subdivisions and asked residents if they had responded to any survey. But they said they haven’t. So how can these surveys be true?” he said.

Binay: I will win with more than 15 million votes