Binay: I will win with more than 15 million votes | Inquirer News

Binay: I will win with more than 15 million votes

Vice President Jejomar Binay on Saturday said he would win with more than 15 million votes in the May 9 polls.

In an interview with reporters after his miting de avance along Lawton Avenue in Makati, Binay said he would emerge the victor in the coming polls through his “silent majority.”

“I think it will be more than 15 million (votes),” Binay said when asked about the votes he expected to get to win the elections.

In his speech, Binay said he would bank on his “silent majority” to become the country’s next president.

Binay confirmed the estimate also stated by his chief campaign adviser Ronnie Puno, the former Interior secretary behind Binay’s grueling campaign strategy around the country throughout the 90-day campaign.

Puno told INQUIRER.net that their reports from the provinces are “good” and which show that most of the poor Filipinos would elect Binay, who is running under an anti-poverty platform by providing free and quality social services.

Puno made his first public appearance during Binay’s miting de avance in Makati.

Puno said Binay would get 15,365,272 votes on May 9, or 30 percent of the expected voters turnout – most of which would come from the sympathizers of the poor.

“I don’t have a crystal ball but our reports are good from the provinces. 15,365,272 from all over the Philippines,” Puno told INQUIRER.net.

“I think the people that sympathize with the poor will vote for Binay,” he added.

Binay earlier said he would win by a margin of four million votes.

READ: Binay: I will win by 4M votes

Puno said in a five-person race, Binay will win as the “minority president.”

“Because it’s a five-man race, for sure the winner, whoever he will be, it will probably be VP Binay, will be a minority president. People will really have to come together after elections,” Puno said.

“We’re going to win. We don’t need to join anybody. If they want to join us, they’re welcome. They can join VP Binay so it can be a democracy for sure,” Puno said.

In an interview with Inquirer editors and reporters on Friday, Pres. Aquino said he was talking with administration bet Mar Roxas and independent candidate Grace Poe to unite against Duterte, raising speculations the administration was pressuring Poe to back out to give Roxas the winning edge.

For his part, Binay said he did not receive a message to join this united front against Duterte.

He said he would not back down from the presidential race, despite his declining survey ratings and lost alliances.

READ: Binay urges Aquino: Call for clean polls instead of unity vs Duterte 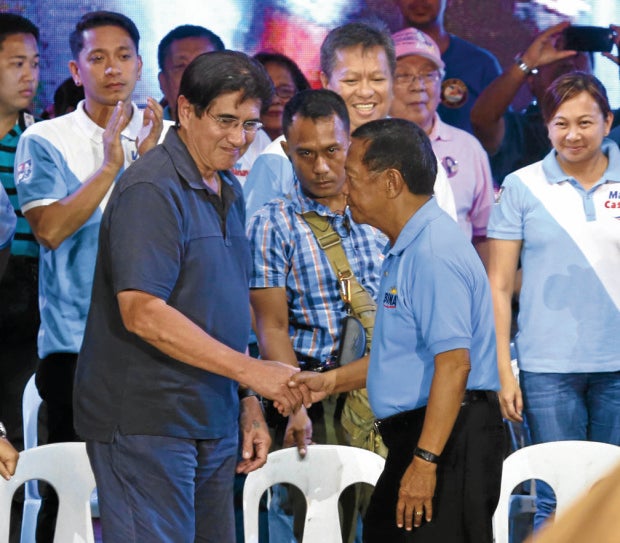