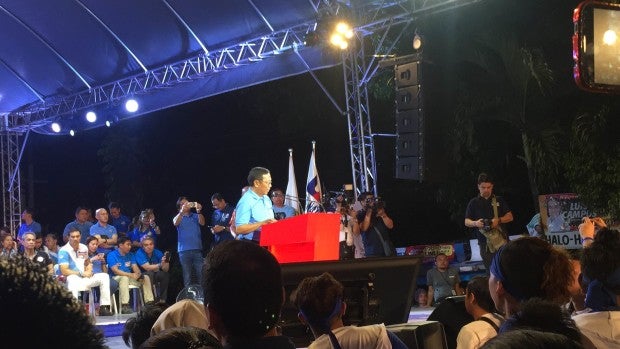 Vice President Jejomar Binay on Saturday vows he would win on May 9 through the silent majority, urging his supporters to protect their ballots from possible election cheating. Photo by Marc Jayson Cayabyab

Despite his decreasing survey ratings and lost political alliances, Vice President Jejomar Binay on Saturday said he would win the elections through the “silent majority.”

Binay made this declaration during his miting de avance on Lawton Avenue in Makati, capping off his grueling 90-day campaign.

His camp claimed at least 60,000 supporters turned up in the miting de avance, but the Makati police estimated the crowd at only 12,000 along Lawton avenue.

He said the surveys where he had been faring poorly did not include the silent majority, which he said would propel him to victory on May 9.

(You who are not asked in surveys, not interviewed by the media, [are the same] who don’t experience progress in the present administration … you are the true silent majority.)

(The silent majority shouts for, ‘Only Binay’.)

Binay cautioned against possible cheating, saying he has heard reports that the vote counting machines during testing turned up names different from the choice of the voters.

He urged his voters to protect their ballot from possible cheating during elections.

(As early now, we’ve heard of [irregularities] especially in Mindanao…if you vote for someone, a different name will appear.)

He personally appealed to Pres. Benigno Aquino III to protect the sanctity of the ballot on elections day.

He said clean and honest elections is a legacy left behind by the president’s mother democracy icon Cory Aquino.

Binay expressed confidence he would emerge on May 9 as the country’s next president.