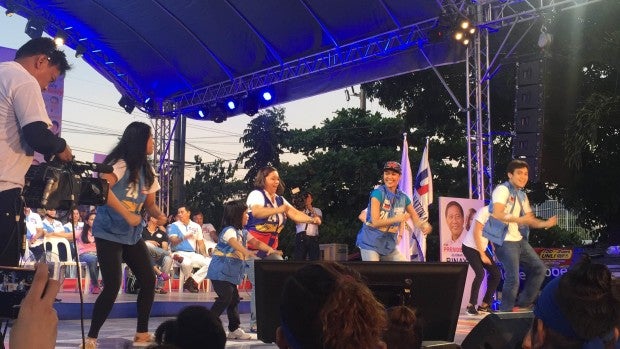 Vice President Jejomar Binay will end his grueling 90-day presidential campaign on Saturday back to his hometown of Makati City, the country’s foremost financial district which his family ruled for over two decades.

The program started at 4 p.m. along Lawton Avenue in Makati, near the University of Makati and the Makati Science High School, both of which have been subjects of controversy amid corruption allegations hurled against the Binay family.

Singer Rita Daniela gave a performance early during the program.

She was accompanied by her husband Luis Campos, who is running as Makati representative, the position which she will vacate.

Television host and actor Jhong Hilario, a candidate for councilor under Binay’s party, roused the crowd and urged Makati to vote for Binay to bring back “serbisyong Binay, serbisyong tunay.”

As of press time, the crowd is waiting for Vice President Binay and senatorial survey favorite boxing champion Manny Pacquiao.

The Binays are seeking to reclaim city hall after mayor Junjun Binay in 2015 was dismissed by the Ombudsman for grave misconduct and serious dishonesty over the allegedly overpriced Makati car park building. IDL