President Benigno Aquino III has declared May 9, 2016 a non-working holiday to allow Filipinos to vote in the national elections, Malacañang said.

“President Aquino signed on Monday, 25 April 2016, Proclamation No. 1254, declaring May 09, 2016 as a Special Public (Non-Working) Holiday throughout the country to enable the entire citizenry to participate in the national elections and ‘to properly exercise their right of suffrage,’” Communications Secretary Herminio “Sonny” Coloma Jr. said in a statement.

Around 55 million Filipinos are registered to vote on May 9, a Monday. More than 18,000 elected positions will be up for grabs, including the highly-coveted posts of president and vice president.

The race for the top two spots has been hotly-contested as shown by electoral surveys.

Tough-talking Davao City Mayor Rodrigo Duterte has been widening his lead, based on the latest Pulse Asia and Social Weather Stations surveys.

Former Secretary Mar Roxas, Aquino’s presidential bet, has yet to take the lead, while Senator Miriam Defensor-Santiago, who is running for the post for the third time, remains in fifth place.

However, closing in on him is the ruling Liberal Party’s Camarines Sur Representative Leni Robredo. 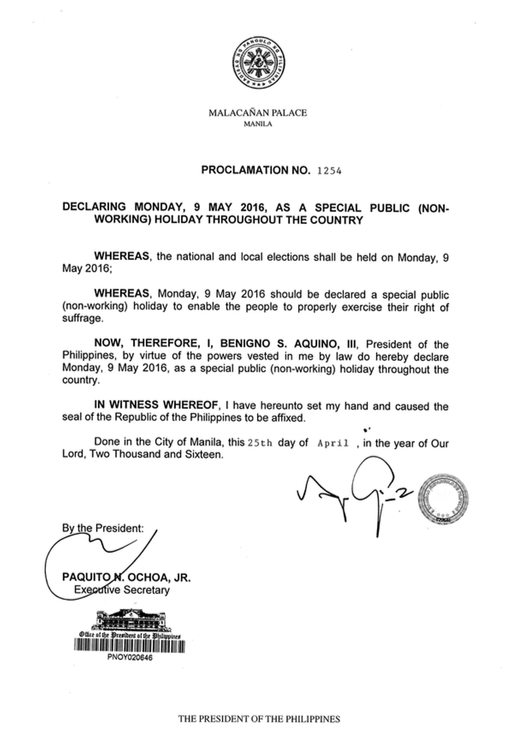