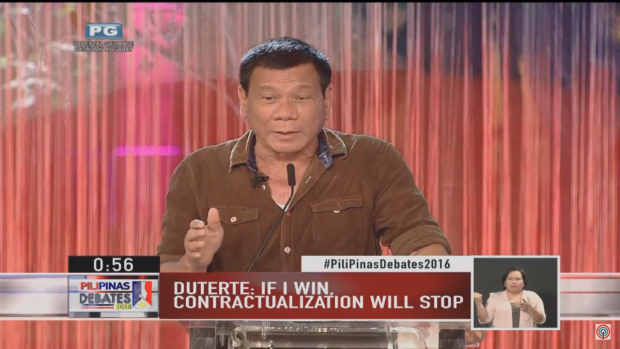 The results of the first survey taken after Davao City Mayor Rodrigo Duterte uttered his controversial rape remarks are out — and the tough-talking frontrunner has only widened his lead. In contrast, Vice President Jejomar Binay has continued to lose support.

Former Interior Secretary Mar Roxas’ standing also improved by one percentage point, from 18 to 19 percent. Binay, however, lost as much ground as Duterte gained: six percentage points, from 20 percent to 14.

Sen. Miriam Defensor Santiago, who returned to the debate stage on Sunday night in Dagupan City, also lost ground, falling from 3 to 2 percent.

The latest SWS survey was conducted among 1,800 “validated” voters, with a sampling margin of error of plus or minus two points. Duterte uttered his coarse remarks about the gang rape of an Australian missionary on April 12, but his statement became controversial only on April 17.

While Social Weather Stations conducts surveys differently from Pulse Asia, the latest SWS results will be read by many as confirmation of the latest Pulse Asia ratings.

The Pulse Asia survey conducted from April 12 to 17, or just before the SWS conducted its field work and also before the controversial rape remarks were made, showed Duterte leading the field with a 34 percent voter preference rating. Poe followed behind with 22 percent — the first double-digit gap between the two popular candidates.

Binay and Roxas came third in a virtual tie, at 19 and 18 percent. Santiago brought up the rear with 2 percent. — JN