Format restrains candidates in first half, focuses on issues 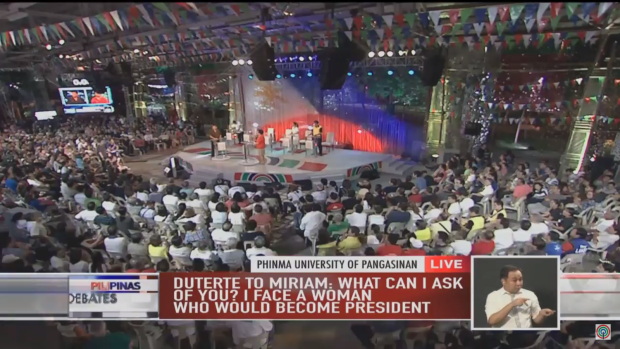 Ninety minutes into the final presidential debate, the tone of the discussion has been cordial and mostly issue-oriented — an unusual departure from the first two debates. It is fair to say that many voters expected more acrimony between the candidates, or at least between presidential front runner Mayor Rodrigo Duterte and the other candidates.

The second part of the debate, which allows pairs of candidates to ask each other questions, promises more give and take.

In the first presidential debate held in Cagayan de Oro, on February 21, the candidates spent a lot of time criticizing Vice President Jejomar Binay, who is facing a raft of corruption allegations, and former Interior Secretary Mar Roxas, for the reported shortcomings of the Aquino administration he is a part of.

In the second debate held in Cebu, on March 20, the tone markedly deteriorated. Provoked by the ill feelings generated by Binay’s high-risk gamble to bring “documents” to the debate stage, the discussion became remarkably uncivil at times. Binay took Roxas to task for the Vitangcol allegations, Sen. Grace Poe suggested that Binay was associated with the controversial foreign exchange firm Philrem at the center of the Bangladeshi hacking, Duterte undermined Poe’s readiness for a security crisis, Roxas lambasted Duterte on his strongest suit, Davao City’s peace and order record.

With Duterte ahead of Poe in the latest Pulse Asia survey by well beyond the margin of error, a direct assault on Duterte’s many controversial statements — including most recently the rape of Australian missionary Jacqueline in 1989 — would seem to make strategic sense.

Arguably, the first two debates had an impact on Binay’s electoral fortunes.

But the first half of the three-hour debate was dictated by the town hall format imposed by the Commission on Elections. ABS-CBN, the lead network organizing the last debate, maximized the format by preparing contextual video reports of the members of the audience selected to ask questions. The result: By and large, candidates focused on the questions and the issues these represented: the West Philippine Sea issue, urban traffic, endemic contractualization, OFWs.

Read Next
BIR checking if Philrem, owners have other tax liabilities
EDITORS' PICK
Nestlé Philippines’ ‘NESCAFÉ Plan’ bags Grand Anvil at PRSP 56th Anvil Awards
Smart reinforces superiority with best speed and mobile video experience in PH
Every Filipino home can now be a smart home with realme TechLife
New 3,045 COVID-19 cases push PH total active cases to 40,074
LTO’s P500-M deal for screws draws scrutiny
How to lose a PH genius: Wesley So officially a US citizen
MOST READ
How to lose a Filipino genius: Wesley So officially a US citizen
US lays out list of aid to ‘satisfy’ Duterte following VFA payment demand
Robredo on Sara Duterte leading poll surveys: Why are Filipinos drawn to leadership of this kind?
Rights lawyer survives attack by playing dead, loses all case files
Don't miss out on the latest news and information.